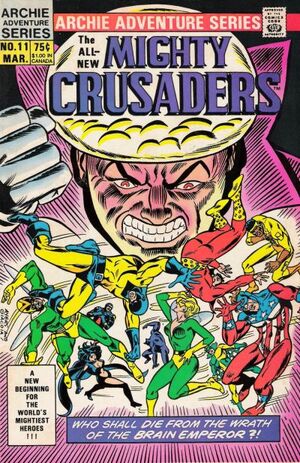 Yours is not to reason why, wall walker, Yours is to just to do and die!

Appearing in "A Hero's Rage"Edit

Synopsis for "A Hero's Rage"Edit

Eraser and his Riot Squad kill the retired (original) Black Hood and go after the rest of the Mighty Crusaders. They track them down and bust into their headquarters. A battle between the two teams ensues, but then the Brain Emperor enters. He hypnotizes the Crusaders with his mind control and tells the Riot Squad he's come to claim them as his own powerless pawns. Doc Reeves has not been hypnotized by the Emperor, and he tries to attack him. Unfortunately, Stinger uses his toxic razor claws and slices him down. Meanwhile, Darkling was able to escape prior to the Emperor entering the headquarters. She finds the Fox and the Comet and asks for their help. Once they're back at Crusader Mountain, everyone is gone except for Doc Reeves, who is dying on the floor. Next stop, Comet's spaceship in outer space, where their foes await. Upon entering the ship, Brain Emperor makes a psychic attack on Darkling, and her mind is wiped clean and he sends her hurtling through the astral planes forever. He then commands his captive Crusaders to attack the Fox and Comet. The Comet blasts the Emperor, and he quickly teleports away from the confrontation. The mindless Crusaders snap out of their psychic control and head for the ship's transporter room. As they jump to safety, and beam down to Earth, the Comet is still on his ship destroying it with his eye beams. Leaving the Riot Squad behind, he also exists the ship as it blows up, killing the three villains. Back at Crusader Mountain, they realize a new beginning is at hand, as two of their comrades, as well as, the original Black Hood, have died.

Retrieved from "https://heykidscomics.fandom.com/wiki/Mighty_Crusaders_Vol_2_11?oldid=1471211"
Community content is available under CC-BY-SA unless otherwise noted.