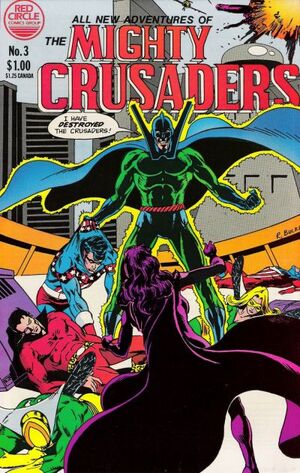 Precisely. Just like I have given Brain Emperor enough rope to hang himself, so to speak!

The Mighty Crusaders continue to battle the Malevolent Legion, and the Brain Emperor, with the help of a new hero called Darkling.

Three mysterious men, known as Delta 3, want to rid the world of law enforcement agencies and "hero" organizations, the Shield might be the first one eliminated.

Retrieved from "https://heykidscomics.fandom.com/wiki/Mighty_Crusaders_Vol_2_3?oldid=1471203"
Community content is available under CC-BY-SA unless otherwise noted.