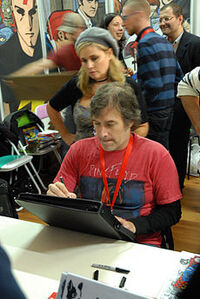 Michael Dalton "Mike" Allred is an American comic book artist and writer most famous for his indie comics creation, Madman. His style is often compared to pop art, as well as commercial and comic art of the 1950s and 1960s.

Allred began his career as a TV reporter in Europe, and started drawing comics in 1989 with the 104-page graphic novel Dead Air (Slave Labor Graphics). Following this up with his similarly titled works Graphique Musique (SLG, 1990) and Grafik Muzik (Caliber Comics 1990/91), he set out the style that he was to become known for with his most famous character: Madman.[1]

The first Madman miniseries debuted from Tundra Publishing in March 1992, and gained higher recognition with its move to Dark Horse Comics in April 1994. Relaunched as Madman Comics, it went on to be nominated for several Harvey Awards. Allred himself gained further mainstream attention with the science-fiction/rock-and-roll comic Red Rocket 7 and his art for writer Peter Milligan's series X-Force, which he began drawing in July 2001, and subsequently became X-Statix after X-Force #128.

Following this, he did The Golden Plates, an adaptation of The Book of Mormon.[2]

His retro-styled artwork is a frequent nominee for comics awards such as the Harveys, the Eisners, and the Eagles. He has received a lifetime-achievement AML Award.

His wife, Laura, frequently works as his colorist.[4]