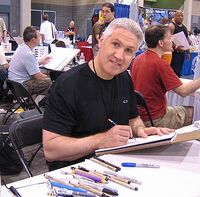 Mike Wieringo was born in Italy and raised in Lynchburg, Virginia -- an American citizen from birth, with dual citizenship in Italy until he was 18. He attended Virginia Commonwealth University, in Richmond, Virginia, USA, graduating with a degree in Fashion Illustration, and broke into comics as a penciler with the Millennium Publications series Pat Savage and Doc Savage: Doom Dynasty in 1991.

Retrieved from "https://heykidscomics.fandom.com/wiki/Mike_Wieringo?oldid=199942"
Community content is available under CC-BY-SA unless otherwise noted.