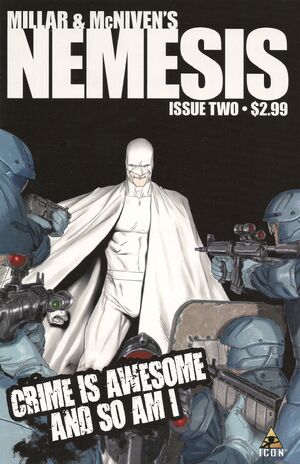 The most talked about new series of 2010 rages on! Nemesis’s tour of terror hits Washington D.C. and hits it hard. That doesn’t bode well for the citizens of the nation’s capital or the man in the house on Pennsylvania Ave. Luckily, the Chief of Police has an idea on how to stop the super-villain-- but can you stop a one man hurricane of violence and mayhem? All this, thanks to the creative team that brought you CIVIL WAR- Mark Millar and Steve McNiven.

Retrieved from "https://heykidscomics.fandom.com/wiki/Millar_%26_McNiven%27s_Nemesis_Vol_1_2?oldid=1471874"
Community content is available under CC-BY-SA unless otherwise noted.