During the satellite years of the JLA, the SSoSV discovered the JLA's identities. Zatanna used her magic to erase their memories. 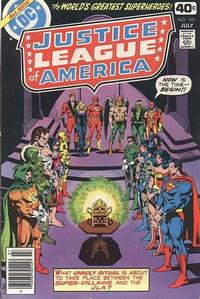 The League that Defeated Itself

During the satellite years of the JLA, the SSoSV discovered the JLA's identities. Zatanna used her magic to erase their memories.[1]

At some point, Doctor Light raped Sue Dibny and Zatanna used her abilities to not only erase his memory, but to alter his personality so as to make him less of a threat. Batman stumbled upon this event, and Zatanna mindwiped his memories as well.

In the wake of Identity Crisis, the JLA decides the time has come to tell Batman that they stole part of his memory. Simultaneously, the League is attacked by the original Secret Society of Super-Villains, whose memories have been restored since their original mindwipe when they learned of the heroes' identities, and are now out for vengeance. As the JLA battles the villains, the Martian Manhunter confronts the alien conqueror Despero, the one behind the villains' memory-restoration.[2] Shortly in the aftermath, Martian Manhunter is incapacitated by a figure who he at first believes to be Superman, who blows up the JLA Watchtower.[3]

The term Mindwipes Storyline is a non-canon term for a group of related storylines, running from the Bronze Age through to the Modern Age.

Retrieved from "https://heykidscomics.fandom.com/wiki/Mindwipes_Storyline?oldid=1623091"
Community content is available under CC-BY-SA unless otherwise noted.