Start a Wiki
Part of the 'Minimum Carnage' event 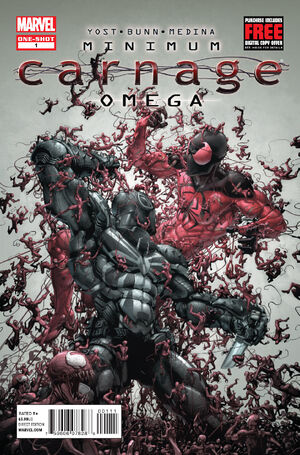 MINIMUM CARNAGE FINALE! • Houston is on fire as Carnage’s greatest act of evil may be his final hour! • The most dangerous web-slingers of all unite with humanity at stake! • Cullen Bunn, Chris Yost and Lan Medina bring the crossover smash hit to its synapse-shattering finale!

Retrieved from "https://heykidscomics.fandom.com/wiki/Minimum_Carnage:_Omega_Vol_1_1?oldid=1731072"
Community content is available under CC-BY-SA unless otherwise noted.