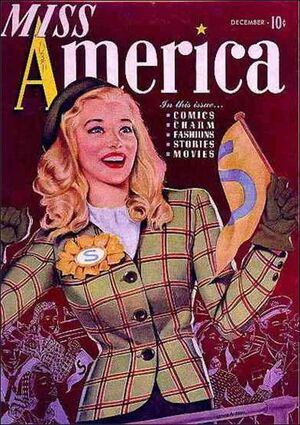 Appearing in "The Case of the Goldfish"Edit

Synopsis for "The Case of the Goldfish"Edit

When her Uncle Jim's friend John Harvey is murdered while talking to Jim on the phone, Madeline Joyce sneaks off to investigate as Miss America. Arriving at the scene of the crime she catches a costumed criminal named the King Cobra searching for secret bomber plans and not finding them. Miss America attacks but is knocked out, allowing King Cobra and his men to flee the scene. When Miss America comes around she hears her Uncle Jim arriving with the police and flees the scene.

At his hideout, King Cobra deduces that John Harvey might have given his plans to his friend Jim Bennett and sends his men to try and locate them. Meanwhile, Madeline has rejoined her Uncle who is going over his dead friends final will. The lights are suddenly doused and Uncle Jim is attacked by King Cobra's men who steal the will. Telling her Uncle to rest, Madeline follows after the crooks as Miss America. King Cobra learns that John willed all his possessions to his pet goldfish. Realizing the plans might be hidden on the fish, King Cobra and his men prepare to head to Jim's house but are once more opposed by Miss America. She is stunned by machine gun bullets and tied up in a room rigged with explosives, but manages to escape.

Rushing back to Uncle Jim's house, Miss America knocks out King Cobra and her men and after turning them over to the authorities reveals to her Uncle Jim that the fish had the bomber plans hidden in a secret pouch. Resuming her civilian identity, Madeline's apatite is quashed when she learns they are having fish for supper and vows never to eat another fish for as long as she lives.

Appearing in "The Secretarial Job"Edit

Synopsis for "The Secretarial Job"Edit

While out shopping with her boyfriend Buzz Baxter, Patsy Walker runs into Hedy Wolf. Learning that Hedy is heading back to her new job as a secretary now that her lunch break is over, Patsy becomes determined to get a job as a secretary. Rushing home, she asks her parents and while her mother doesn't think she needs one until she graduates her father gives a non-committal noise from behind his newspaper that Patsy takes as approval.

Patsy is about to rush off right away when she realizes that she needs to change to look more professional. She scoffs at her mothers suggestion that she should become a junior nurse and drags Buzz to the office building where Hedy works. Making Buzz wait inside, Patsy runs into her friend Nancy Brown and the two go for a Coke. Patsy becomes engrossed in conversation, forgetting about her job hunting and leaving Buzz waiting for over two hours. Concerned about Patsy, Buzz goes up to the Acme Employment Agency and while he stumbles over explaining why he has come to the office he manages to talk himself into landing a job.

When Patsy finishes her Coke with Nancy, they both leave the office when Patsy realizes that she left Buzz waiting. Finding a note telling her he got a job while waiting, Patsy is angrily greeted by Buzz who is carrying a large crate. Patsy then ditches him, telling Buzz that she is going to get a job as a junior nurse after all since it's a more important job.

Appearing in "The Snake Ring"Edit

Synopsis for "The Snake Ring"Edit

As Madeline Joyce and her Uncle Jim walk down a street at night they witness a woman being poisoned by a mysterious attacker. They arrive too late to save the girl and drive her dead body to the local morgue. When Madeline goes inside to get the mortician, Uncle Jim is attacked by the girls killer who steals her corpse. When Madeline and the mortician come outside they find Jim knocked out and the body stolen. When Jim explains everything the mortician takes him to the hospital allowing Madeline to change into Miss America and try to track down the killer.

Finding the girls evening bag, she learns the dead girl was Dwana Lukas, a high society girl that she had read about. Going to the girls apartment to search for clues as Miss America, Madeline is attacked from behind by Dwana's killer. When she comes around, Miss America finds that the killer was eliminating finger prints and other evidence linking him to the crime. Finding a phone number written in a man's handwriting, Miss America calls the number and finds that it belongs to the Inter-City Cab Company and inquires if a cab was recently called to the address.

Making sense of the murder, Miss America then flies to the nearby newspaper to and digs up an old story from 1942 that told of Dwana inheriting her family fortune and realizes the only person who could have benefited from Dwana's death was her uncle and legal guardian John Lukas, but still can't understand why he stole her body. Deciding to pay John Lukas a visit, she is initially rebuffed from any questions. Telling Lukas that his niece is dead, she accuses him of trying to obtain the fortune. He attempts to tell her that the money would actually go to the Bringham Foundation for Paralytics. Miss America plays along but asks to see the ring on John's finger. But when John refuses to show her she recognizes it as having a similar mark as one found on Dwana, outing him as the killer.

Miss America then easily subdues John and turns him over to the authorities. Changing back into her civilian guise, Madeline pays a visit to her father in the hospital, where she tells him that she spent the time away "gallivanting" to see a man about a ring.

This issue features the following text stories:
Sauce for Gander by Ruth Gillbert Cochrane on Page 4
X Plus Y by Maxine Shore on Page 8
Thinking is Being by Helene Wanderman on Page 10
She Call Me Dad by "Everybody's Dad" on Page 35

Features the following articles on movies:
Hollywood's Younger Set by Trudy Smith on Page 3
Miss Molly Dimples (Diana Lynn) by May Mann on Page 6
Career-Minded Minx (Janet Martin) by April Carveth on Page 16
Articles on Fashions:
What Goes a fashion quiz on Page 11
Miss In-Be-Tween Featuring the clothes of Jane Powell on Page 14
Miss America's Favorite Fashions on Page 49
Dream Best on Page 60
Articles on Charm:
Said the Spurter to the Mumbler by Karen Van Lissel on Page 44
Road to Charm by Gladys Steiner on Page 47
Special articles:
Dear Betty Ann by Victoria Allen Dunford on Page 12
Sigh-Entific Studying by Linda Hopp on Page 18
Your Heven by Beulah Kraft on Page 26
Is This You? by Rita Dorn on Page 51
Tricky Test for Teens by Martin Panzer on Page 54
Metropolitan Baby by Kay Sullivan on Page 57
For Girls Only by Nina Wilcox Putnam on Page 62
An a $1000 Cash price contest announcement on Page 45

Retrieved from "https://heykidscomics.fandom.com/wiki/Miss_America_Magazine_Vol_1_3?oldid=1761054"
Community content is available under CC-BY-SA unless otherwise noted.