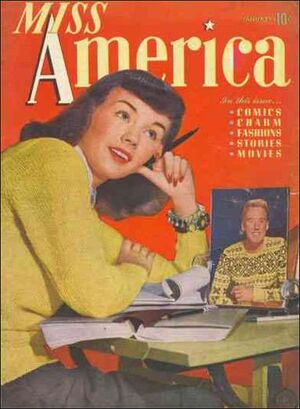 Appearing in "Case of the Crystal Unicorn"Edit

Synopsis for "Case of the Crystal Unicorn"Edit

Madeline Joyce is about to end a day of shopping when she spots a crowd in front of a Main Avenue shop and decides to check it out for herself. The shop turns out hold a bunch of hand blown glass statues and she decides to go in and try to find something for her Uncle Jim's den. Inside she overhears one of the salesmen telling Mrs. Van Emery Lucre that the sculpture she is interest in is a display only and not for sale but tells her that one can be specially made for her in a few days time. When Madeline removes a peacock statue out of a display case, she notes that it is cold inside the case. One of the clerks spots her pulling the statue out of the display case and he demands that she put it back as it was sold to Mrs. Ritzbilt. Madeline puts it back and then asks what they have that would be suitable for a man's den. The clerk shows her a glass sculpture of a stag, which is proceeds to sell to her right away for $25.00 when Mrs. Ritzbilt enters the store. This strikes Madeline as suspicious as she did not have to wait for her carving like the other customers. She watches as the clerk tells Mrs. Ritzbilt that her carving still needs some final touches before they can give it to her.

Finding it all strange but returns home without giving it much thought. Later she gives the glass elk to her Uncle Jim, but the days events still bother her and she decides to go for a walk. Finding herself walking to the glass shop she is surprised to witness an exterior elevator open and a shipping car pull up. She watches in secret as a bunch of men move items into the shop in the dark of night, making her more suspicious than ever. When a large case suddenly is carried into the vehicle, Madeline decides to investigate as Miss America. Changing into her costume, she follows after the delivery car as it drives to the docks. There she watches as the men attempt to dump something into the water and decides to see what that is. Fighting the men off, Miss America watches as the crate almost falls into the water but saves it, at the expense of letting the men get away. When a police officer arrives on the scene they both open the crate and discover a dead body inside. While the officer is trying to identify the corpse, Miss America spots something one of the crooks dropped and picks it up. Miss America then identifies the dead man as Detective Timmons and then flies off to investigate things further.

Returning to the glass blowing shop, she arrives just as the men driving the delivery truck have returned to report back to their bosses. Spying on them, she overhears them talk about how they are going to deal with her interference in their schemes. The leader of the gang points out to his men that the police have nothing on them and that if Miss America comes snooping around he has a way of dealing with her. After appeasing his men, he dismisses them so that he can prepare planning or the Ritzbilt heist the following night. With this information, Miss America refers to what she picked up from the docks: A black book containing cryptic notes that identify who their robbery targets are in some sort of code. She then flies to police headquarters where she goes through the late Detective Timmon's notes to figure out a clue at deciphering them. She gets the chief of police to admit that there have been a string of robberies recently that they are trying to keep a low profile on. Realizing that the glass statues somehow play a part in these thefts, Miss America flies off to check the various purchasers of glass statues as Madeline Joyce.

She eventually realizes that the next target is the Ritzbilt house where the glass peacock from earlier has been brought. When Miss America arrives on the scene the glass statue begins emitting a knock out gas. She is captured by one of the men from the glass blowing store and brought back to their hideout. Bound up, she learns from their leader how their operation works, wherein they use ice to contain the knock out gas which eventually thaws out in the victims home knocking everyone out and making it easy to loot their homes. Telling her that her bonds contract in the cold, the leader turns on the freezers in the hideout so she is crushed to death and leaves her to die. Miss America spots a blow torch and uses it to burn through her bonds, freeing herself. Chasing after the crooks, she makes their getaway car crash into a lamp post where it catches fire leaving the crooks to beg for help. Miss America gleefully rescues them, confident that they are trading in one hot seat for another.

The post man comes to deliver a telegram to the Walker house and is first bowled over by Mickey Walker, and then has to deal with Mary Walker, who faints whenever a telegram comes to the house. When Stanley opens the telegram they learn that their nephew Percy is coming to visit. They tell Patsy to go to the train station to meet her cousin. Patsy, having not seen her cousin in over seven years shudders at the idea because previously he was a skinny and weak and she considers him a pest. However, her parents talk her into it and she goes, but takes Buzz Baxter with her. Along the way, she tells Buzz about her wimpy cousin when the train arrives.

When the train pulls into town, they both watch a handsome young man disembark from the train who answers to the name Percy. The attractive young man causes Patsy to faint, prompting Percy to come to her aid. Buzz, believing that Patsy had lied to him storms off promising to show her. Meanwhile, Patsy has revived and is completely smitten by her handsome cousin. Walking home with him, arm-in-arm she takes the time to be catty with her rival Hedy Wolfe before introducing Percy to her folks. The whole evening Patsy moons over Percy until it is time for bed. That night, Patsy has trouble sleeping and decides to go downstairs for a bite to eat. On the main flood of the house she catches Percy as he just finished robbing the family safe and is crawling out the window.

Struggling with what to do, Patsy answers a knock on the door. It is a police man who has captured Percy and is with another young man who is skinny and wearing glasses. As it turns out, the young man they thought was cousin Percy was just a young hood who happened to have the same first name and took advantage of the Walker's hospitality while the skinny young man was the real cousin Percy. Patsy is horrified by her mistake as the police take the impostor away.

The next day, when Hedy asks Patsy to set her up on a date with Percy, she is more happy to comply. When Buzz sees that Percy is the spindly young man Patsy said he'd be all is forgiven and the quartet go on a double date, much to Hedy's chagrin.

This issue also features the following:
Stories:'
Christmas Climax by Frank Martin Webber Soot and Satan by Maxine Shore Miss Heatherby by Dorothy Wendell Helen Rogers, Cadet Nurse by Vera Lawson Movies:
Hollywood's Younger Set by Trudy Smith School is Fun by Mimi Collins Fashion: Merry Models Miss America's Holiday Fashions Fashions of Filmland Charm: Your Manners are Showing by Tina Travers Right -- This Way by Lucy Hedge Class Room Belles by Joanne Fist Beauty or Bust by Frances Lane Specials: Dean Betty Ann by Victoria Allen Dunford Make Up Your Mind by Janet Martin So You Know All the Answers by Rosalie Wilson Are You a Turtle? Tricky Test for Teens by Martin Panzer Could Be Too True For Girls Only by Nina Wilcox Putnam

Retrieved from "https://heykidscomics.fandom.com/wiki/Miss_America_Magazine_Vol_1_4?oldid=1761446"
Community content is available under CC-BY-SA unless otherwise noted.