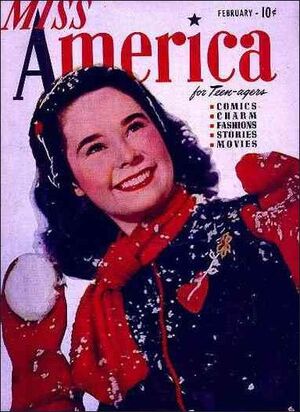 Appearing in "Mystery of the Cherub"Edit

Synopsis for "Mystery of the Cherub"Edit

A new criminal called the Cherub (so called due to his youthful and handsome looks) has committed a wave of robberies in which any witnesses are killed. His next victim is a wealthy banker, and after shooting the banker dead he leaves his usual calling card -- a photo of himself -- and then calls the police. The police send a squad down to try in the vein hope of apprehending the Cherub, but have not yet been able to do because he somehow finds a way to escape capture. Hearing about the recent killing on her car radio, Madeline Joyce races to the scene as Miss America.

Arriving at the bankers apartment building, she is attacked by a chauffeur waiting outside the building. She easily subdues him and rushes inside, however the only other person in the building is an elderly scientist who identifies himself as Dr. Neumensch. He explains that he was called to the scene as well and that the chauffeur outside is his. Although initially suspicious of the old man, Miss America must concede that Neumensch is too old to be the Cherub. With nothing to hold the doctor on the police are forced to let him go, however Miss America is still suspicious of the old man and promises the commanding officer that she will find the connection between Neumensch and the Cherub.

Having been informed during the interrogation that Neumensch was originally from Vienna, Miss America changes back into her civilian guise and goes to the local library. There she looks up the medical director of Vienna. There she finds the connection. However when she arrives at the police station, its moments after the officers got a call from the Cherub telling them that he has eliminated Neumensch to foil the police in learning the connection between the two. Rushing to Neumensch's apartment, Miss America finds fire fighters trying to put out a roaring inferno.

Too late to do anything, Miss America spots Neumensch's chauffeur racing away from the scene and flies after him. Seeing him pull into a house, Miss America decides to use her civilian identity to fool the Cherub. Approaching his home as Madeline Joyce, Miss America is confronted by the chauffeur who demands to know what she is doing there. Madeline then pretends to faint, and when the chauffeur's guard is down Madeline knocks him out and then changes into Miss America and enters the house.

There she confronts the Cherub who is working on a chemical experiment. Confronting him, Miss America reveals that she has deduced that he is really Dr. Neumensch. The Cherub confirms this, explaining that he has developed a chemical that can reverse one's age, however it is only temporary and that he commits his robberies to get the funds needed to continue his experiments in the hopes of making the transformation permanent. As they are discussing the facts, the formula wears off and Neumensch reverts to his natural age. Before Miss America can apprehend him, the chauffeur attacks. While Miss America is busy dealing with him, Dr. Neumensch sneaks up from behind and knocks her out. Miss America feigns being unconscious in order to regain her strength, grabbing a broken piece of glass off the floor as they tie her to a chair.

Neumensch then uses his formula to regress his age once more, and then prepares another batch to use on Miss America to transform her into a baby. However, before the Cherub can inject her, she breaks free from her bonds and knocks him aside. When the chauffeur resumes his struggle with her, he catches a bullet in the back fired by his employer. With capture immanent, the Cherub chooses death over imprisonment and causes his chemicals to burst into flames hoping to kill Miss America as well. However, Miss America flies out of the skylight and leaves the Cherub to die as his lab explodes.

With valentine's day coming up the Walker children are busy trying to figure out what they are going to do. While Mickey is thinking up various nasty things to send to his teacher Miss Walters, Patsy stresses over coming up with the ideal valentine for her boyfriend Buzz Baxter. Calling her friend Nancy Brown, the two agree to go to the stationary store after supper to look for Valentines Day cards.

After dinner and getting money and advice from her parents, Patsy takes Mickey with her to the stationary store. There they meet up with Nancy, and Mickey finds an insulting card to give to his teacher. Patsy soon finds the ideal card for Buzz, and quickly has to hide it when Buzz arrives at the store to find a Valentine for her. Later after everyone pays for their cards and leaves the envelopes to be mailed out, Mickey gets a devilish idea and switches all the cards into different envelopes.

The next day when Patsy opens the card she thinks is from Buzz, she finds the insulting card her brother found later. Mickey's teacher finds a touching card from him, while Buzz finds that his card was returned to him and thinks Patsy sent it back to him. Later that day, while Buzz and Patsy are angry at each other, it's not until Hedy thanks Buzz for his Valentines Day card when they realize that Mickey must have played a prank on him.

Things begin to backfire for Mickey when his teacher Miss Walters is really nice to him. When he returns home he is unaware that Patsy, Hedy, and Buzz have talked to his parents and they all have hatched a plan to get back at him. When everyone is super-nice to Mickey, he becomes riddled with guilt and confesses to the whole thing and promises to take Valentines Day more seriously in the future.

Retrieved from "https://heykidscomics.fandom.com/wiki/Miss_America_Magazine_Vol_1_5?oldid=1446748"
Community content is available under CC-BY-SA unless otherwise noted.