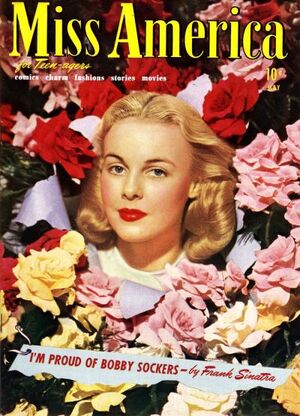 Appearing in "Roomers and Rumors"Edit

Synopsis for "Roomers and Rumors"Edit

Patsy Walker is at home with her friend Nan Brown and brother Mickey when suddenly a man knocks at the door. Patsy answers it and the man asks if this is the house with the room for rent. Unsure if her parents had put the room up for rent, Patsy welcomes the man into his house and soon realizes that the man had mistaken the address, as the advertisement stated that the house with the room for rent was on 177 South Townsend Ave. Patsy realizes the error since her family home is on North Townsend Ave, but feels its too late to tell the new boarder that.

The following day Buzz meets with Mr. O'Sullivan who assures Buzz that he does not need to worry about him taking Patsy away. When Mr. O'Sullivan explains why, Buzz is instantly put at ease. Meanwhile, at Patsy's house, Patsy tells Nancy that she is going to the party with Buzz because Mr. O'Sullivan said that he had to meet someone before coming to the party. Later at the party, the girls are shocked when Mr. O'Sullivan arrives with his wife and daughter, who is also named Patsy. While Hedy is shocked and flabbergasted by this development, Patsy finds the O'Sullivan baby completely adorable.

Danny wonders what he can do to help the war effort while at the theater and sees a film reel about a man who sold chickens and used the money to invest in war bonds. Gathering his friends and attempting to emulate the same model, Danny soon realizes that the cost of getting and feeding chickens would net him and his friends a profit of $1.40. However a farmer purchases the entire lot for $875, getting them a profit of $81.80 which the trio then spend on war bonds and stamps.

Tells the apparent story of Joyce Reynolds rise to stardom.

Retrieved from "https://heykidscomics.fandom.com/wiki/Miss_America_Magazine_Vol_2_2?oldid=1446751"
Community content is available under CC-BY-SA unless otherwise noted.