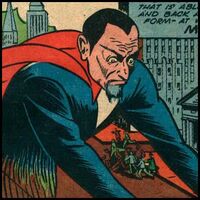 So you came to warn them about me, eh? Well, I'll save you the trouble! I'll warn them myself!

The Mist's origin is unknown, but what is known, is that after killing scientist Cyrus Roland for a treasure map (which he still couldn't find), he followed Roland's son, the Black Hood and Barbara Sutton to the jungles of South America. He hoped to steal the hidden treasure from the trio, but instead they all found much more – a "time tube machine," exploding volcanoes, prehistoric monsters and a boiling lake, where the Mist drowned and therefore met his doom.

Retrieved from "https://heykidscomics.fandom.com/wiki/Mist_(Earth-MLJ)?oldid=1577980"
Community content is available under CC-BY-SA unless otherwise noted.