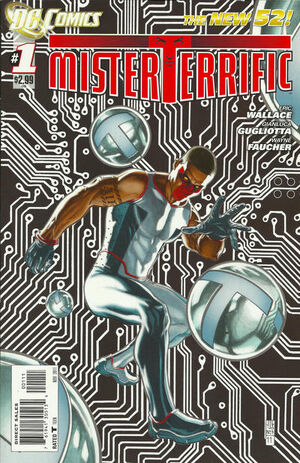 Actually, a simple "Thanks, Black Guy, for saving us from a homicidal lunatic wearing weaponized body armor" will do.

In London, England, Mister Terrific storms Dalton Technologies in search of a ten-foot suit of biomechanical armour. He hasn't got much longer to look, because Miles Dalton appears in the suit, blasting him through a wall. He uses rides his T-Spheres over the city towards the London Eye, drawing the attention of the residents below. Miles Dalton follows, sending blasts of energy after Mister Terrific. Finally, as they pass by the London Eye, he magnetizes Dalton's copper suit, causing it to stick to the large metal structure.

In the past, Michael Holt had had a charmed life. He earned an Olympic medal and numerous university degrees before even reaching the age of twenty. He also had a wife. He and Paula had been trying to have a baby, but one night on the way home from a work party, he discovered that she had been in an accident. As he knelt over her, she begged him to promise to keep educating people with her dying breath.

After that, he had put all of his energy into science. After a project meant to open a dimensional rift failed yet again, he decided to end his own life by hitting the self-destruct button on the machine. Suddenly, the device activated, and a man appeared with a message: don't give up. The man was sent to remind Michael to educate the world, because the future depends on it. Before leaving, the man reveals that he is Michael's son.

Meanwhile, in the present, Michael is having a casual relationship with Karen Starr, of Starrware. She's just stopping by for a day or two, but he invites her to stay for dinner at a fundraiser for a presidential candidate.

Elsewhere, a man named Edgar Holowitz takes his lunch at a diner, but then suddenly his attitude changes, and he begins behaving belligerently. He insults a waitress, and as he walks out into the parking lot, he murders a homeless man. Later, the LAPD calls Mister Terrific to investigate. They have captured Holowitz, but he is now engaged in automatic writing. He has written pages and pages of mathematical equations. Mister Terrific points out that they are of a kind that would confuse even some of the smartest astrophysicists.

Afterwards, Mister Terrific uses his T-Spheres to open a dimensional rift to the Ninth Dimension, where he hides his T-Sanctuary. Using his equipment and superior intellect, Mister Terrific determines that some outside force sent Holowitz' mind into overdrive. But why? And for what purpose?

Later, at the fundraiser, Michael greets Senator Gonzalez, the candidate he is endorsing in his presidential race. Gonzalez' focus on science has caught Michael's eye, despite their differing political views. While Michael shows the senator around, Karen runs into Aleeka, a colleague of Michael's. Karen questions Aleeka as to why she has been staring at her all night, adding that she and Michael are just friends. Aleeka doesn't hide that she has feelings for Michael, but notes that because of Karen's financial success, she herself doesn't stand a chance.

Elsewhere, Michael shows the senator a device called a Crystalline Electromagnetic Energy Node, which helps stabilize the building in the event of an earth-quake. Suddenly, as he is talking Michael hears a high-pitched hum which he senses that nobody else is aware of. Suddenly, his attitude changes, and he activates the machine, causing rather than preventing an earthquake, and putting everyone in danger. Inexplicably, it has become Michael's desire to kill the senator.

Retrieved from "https://heykidscomics.fandom.com/wiki/Mister_Terrific_Vol_1_1?oldid=1501363"
Community content is available under CC-BY-SA unless otherwise noted.