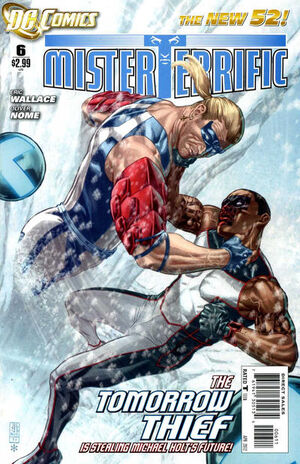 The name's Mister Terrific, and you have something that doesn't belong to you. Now hand over the KRC. Or things get nasty.

After having announced his plan to reveal his intended successor at Holt Industries, Michael Holt makes his colleagues wait for a certain delivery to be made. Finally, Jamaal Mason walks in, thinking he has been asked to deliver results to department heads. However, Michael reveals that it is Jamaal he has chosen to succeed him. With that said, he leaves Jamaal with Aleeka to be trained while Donald Leeson seethes.
Meanwhile, Michael travels all the way to Iceland to meet with his old flame Lilija Eriksdottir, who happens to be the director of the Conscientia Intitute's Icelandic location. She has been in charge of the design of a special railway in Iceland that would do wonders for the country's economy without negatively affecting the local environment. Today is Valentines Day, and it is also the day of the railway's launch.
Meanwhile, over dinner, Aleeka and Donald share their concerns over the Michael's decision to put Jamaal - a sixteen year old boy - in charge. Donald begs Aleeka to help him convince Michael to step aside. Aleeka is wary of the fact that Donald seeks to take control of the company, and demands one good reason why she shouldn't call Michael and tell him about Donald's plans. Donald attempts to appeal to what he perceives as the romantic connection between the two of them, but Aleeka is unreceptive, warning him that he is approaching sexual harassment. Angrily, Aleeka leaves the restaurant, stating that the dinner was a mistake. Donald thinks to himself of how Aleeka has missed her chance to join him in the Circle Revolution.
The rail train is powered by a special device that Michael designed called the Kinetic Rail Capacitor, which Lilija built. She is suspicious of Michael's motives in coming all the way to Iceland, commenting that it can't have been just to see an old flame. Michael explains that his hectic life has got him to think about his recent actions, and he has come to apologize, in a manner of speaking. Lilija explains that the apology is unnecessary, as all they had was a fling. Michael wonders if she ever wanted more, and she responds that she did not.
Before she can explain why, the train is suddenly attacked by a French-speaking thug called the Tomorrow Thief, named for his penchant for stealing cutting-edge technology. He has come for the Kinetic Rail Capacitor. Michael intercepts him, and explains that as the man who he helped make the train possible, the Tomorrow Thief ought to talk to him. Instead, the Frenchman grabs him by his coat and throws him from the moving train. The Tomorrow Thief steals the KRC and flies off with a jet-pack. Lilija orders a rescue team assembled, knowing that Michael will not likely survive the cold, if he survived the fall at all.
Michael had survived, and he had used his T-Spheres to change into his Mister Terrific outfit. Trapping Tomorrow Thief in a force-field, Michael demands the the return of the KRC. Unexpectedly, the Tomorrow Thief manages to pass right through the field, which prompts Michael to give him a blast with his T-Sphere.
On the ground, Michael finds the intact KRC, but Tomorrow Thief is nowhere to be found. Suddenly, hands spring up from the ground and yank him down to the ground. Tomorrow Thief explains that he is not as concerned with "Fair Play". Michael surmises that Tomorrow Thief has the ability to change the bonds between electrons, but he realizes this too late to stop the man from sending an atomic shock to his entire molecular system. Fortunately, Michael survives - his T-spheres do not.
With few remaining options, Michael destroys the KRC, leaving the Tomorrow Thief with nothing. The thief leads Michael into a cave in the glaciers. Inside, there is a volcanic vent. In order to fight the Tomorrow Thief, Michael launches him into the hot volcanic lake nearby. Knowing that hydrogen and ionic bonds are easily broken by high temperatures and pressures, the thief will have some difficulty controlling any molecules in order to escape.
Despite having succeeded in defeating the Tomorrow Thief, Michael is still likely to freeze to death. When he encounters a lake, he remembers a controversial survival technique that he might be able to put to the test. He walks straight into the sub-zero waters.
Later, Michael wakes in a hospital bed at the Conscientia Institute with Lilija by his side. She is rather displeased that he would attempt something as risky as putting himself into a hibernation state until someone found him. Fortunately, she had sent the rescue team to find him. At least, she thinks, she should be happy that he had faith that they would find him in time. Michael responds that he took a calculated risk that science would keep him alive long enough to be rescued and resuscitated. Lilija comments that talk like that is why she didn't want more from him than a fling. Michael is disheartened, but eventually, he looks up, and wishes her a happy Valentine's Day.