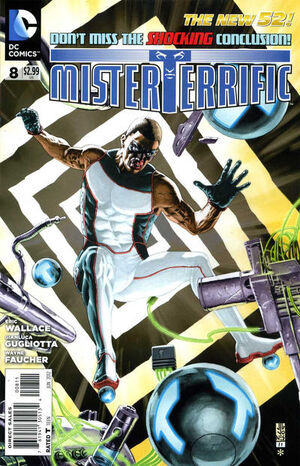 If this is the end, then what better way to go? I'm leaving this world behind, and with it every unanswered question, every complex mystery, every unfulfilled notion. Because that's what endings are all about. Answers. To the biggest questions of all. I can't wait to find out.

Appearing in "The Truth is out There"Edit

Synopsis for "The Truth is out There"Edit

At Holt Industries, Jamal Mason struggles to be the leader that his mentor Michael Holt appointed him to be. He is saved from having to make any definitive decisions by what seems like a sudden earthquake.

The quake is actually caused by Donald Leeson - now more computer than man - crashing through the main lobby with Aleeka Okafur in his grasp. Letting Aleeka drop to the ground, Donald reaches into the building's main computer lines and absorbs the electricity, finally throwing aside the last vestiges of his humanity, and taking on the moniker of Digitus.

Suddenly, Mister Terrific leaps out of the dimensional rift to land a kick on the the interloper, and confine him with his T-Spheres. Unfortunately, Digitus absorbs the photon bursts from the spheres, and Michael needs a new strategy. He soon discovers that Digitus' computer-brain is able to perform predictive calculations to know which moves that he plans to make, making it very hard to fight him. Not only that, but Digitus seems to have control over other AIs, taking command of Holt Industries' security systems, and turning them against Mister Terrific.

At the nearby Camp Pemberton Marine Base, Commander Lincoln receives reports of a familiar energy signature being used in downtown Los Angeles. Despite Mister Terrific's reputation as a super-hero, Lincoln considers him a vigilante, and the T-Duality technology that he wields could be dangerous in the wrong hands. This time, Lincoln won't let Mister Terrific get away from him.

Outside the Holt Industries building, a crowd of citizens have gathered beyond the police cordon, and intrepid reporter Athena Tavaris decides that she will drag her camera man past the barrier and into the building to find out what's really going on.

Meanwhile, Digitus turns Mister Terrific's own T-Spheres against him, requiring Michael to make them self-destruct, in order to protect himself. Defenceless, he realizes that there may be one last thing inside Holt Industries that he can use as a weapon. He begins leading Digitus into the Nexus of Holt Industries, where the CIN is kept. There, Digitus reveals his intent to destroy all of the technology therein, and ruin Holt Industries, confirming Michael's suspicion that Donald's jealousy is still a driving force behind Digitus' actions.

Banking on the fact that Donald doesn't know that Mister Terrific is one and the same with Michael Holt, Michael begins pretending to hack into the CIN's system. Digitus falls for it, attempting to gain control of the CIN's AI, and commanding it to destroy itself. In response, the CIN shuts down Digitus' systems. Michael muses that despite Digitus' intent to destroy the CIN, the system's AI was programmed to respond like any intelligent being and destroy threats to its integrity.

Despite having defeated Digitus, another attack comes on Holt Industries, and Mister Terrific turns to see that he is surrounded by Commander Lincoln and his Blackhawks. Seeing Lincoln again, Michael recalls their first encounter.

After discovering the T-Duality technology and receiving a visit from an alternate reality's version of his unborn son, Michael took up the mantle of a costumed super-hero. He had always intended to make his identity public, but when the day came where he had intended to do so, he found himself confronted by Andrew Lincoln. At the time, Lincoln had decided that the T-Spheres were too dangerous to be in the wrong hands, but naturally, Michael considered his own hands to be the right hands. They tried to have him arrested, but he managed to escape.

Michael still feels the same way about his technology - it would not be safe in the hands of the United Nations. As Lincoln tries once again to apprehend Mister Terrific, they are interrupted by the appearance of Athena Tavaris, who begins to argue Mister Terrific's case as the hero that Los Angeles needs. Lincoln counters with frustration that Mister Terrific is a dangerous vigilante, but Tavaris persists. Lincoln soon receives a call from the top, commanding him to stand down lest the issue go viral in the media.

That night, Michael goes through the Holt Industries interior network, and discovers that after Donald's initial breech, a second tap into the nexus was executed. Whoever did it stole some theoretical specs that Michael was working on regarding quantum tunnelling - the same technology that his unborn son had used to contact him from another world. Using the data left behind, Michael hopes to retrace the equations that the thief ran, and identify who it was.

As he leaves his office, Michael bumps into Aleeka. She explains that she was looking for him, because she wanted to say goodbye. She is leaving for Washington, D.C. in the morning, having been there far longer than she would have on any other consulting job. Michael is confused, and she goes on to explain that she had put her life on hold for him, waiting around at Holt Industries for him to take notice of her and the feelings she held for him. She presses her lips to his, taking him by surprise, and then she says her goodbyes. Michael realizes that despite being one of the third smartest men in the world, he had failed to suss out the fact that a beautiful woman was in love with him.

In his T-Sanctuary, Michael solves the tunnelling equation left behind by the thief, and realizes that it could be the key to travelling between universes. The computer uses the data to determine that the thief was actually Karen Starr. He wonders why she would have been interested in the technology, and begins to doubt whether their relationship was real - but even so he forgives her. He resolves that he will find out what she is hiding.

He has the computer integrate the solved equation into the sanctuary's gateway system, in order to see what Karen was doing. The gateway opens a wormhole, and Michael is sucked inside. He worries that he might die, but he realizes that if he does, he will simply be leaving behind the unanswered questions of this world and finally discovering the answer to the greatest question of all. Michael can't wait.

Retrieved from "https://heykidscomics.fandom.com/wiki/Mister_Terrific_Vol_1_8?oldid=1584810"
Community content is available under CC-BY-SA unless otherwise noted.