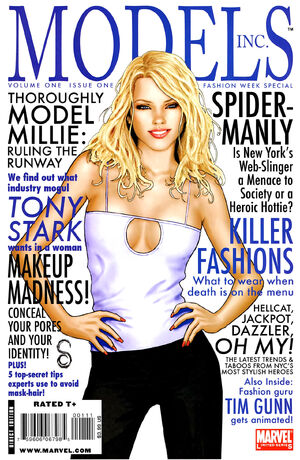 Fashion Week is always a hectic time for models, and this year is no exception. Between escaped wolves, robbery attempts, and overly friendly police officers, Mary Jane Watson, Patsy Walker, Jill Jerold, Chili Storm and Millicent (Millie the Model) Collins are testing the limits of their endurance. But when a brilliant young set designer is found murdered with three bullet holes in his back, and Millie proves to be the prime suspect, the models are forced to play detective in order to save one of their own!

Retrieved from "https://heykidscomics.fandom.com/wiki/Models,_Inc._Vol_1_1?oldid=1447707"
Community content is available under CC-BY-SA unless otherwise noted.