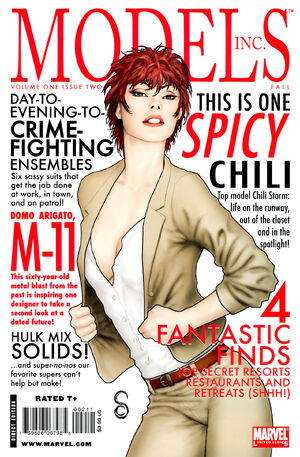 Millie Collins suspected of murder? Could it get any stranger? How about when she's linked to a second murder by a policeman who's intent on making a name for himself, and who has romantic intentions on Millie? It’s up to her fellow models, Jill Jerold, Patsy Walker, Chili Storm and Tony Turner to turn up the clues to turn Millie loose! Don’t miss a minute of the action, from floral prints to fingerprints, as the Marvel Models delve deeper into this mysterious case!

Retrieved from "https://heykidscomics.fandom.com/wiki/Models,_Inc._Vol_1_2?oldid=1447708"
Community content is available under CC-BY-SA unless otherwise noted.