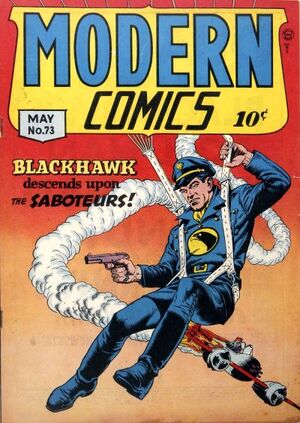 Yes my men are foreign born or of foreign descent -- but what American isn't? Does that make them less loyal, less patriotic than you or others? My men bear allegiance to only one ruler ... JUSTICE!

Appearing in Blackhawk: "The Saboteur"Edit

Synopsis for Blackhawk: "The Saboteur"Edit

An international terrorist calling himself "Nitro" wages a terrorist campaign of bombing against the United States, blowing up the Grand Canyon Dam, the "Silver Rocket" crack express train on the New York Central, a steel mill, and several other high-profile targets including a suspension bridge, a shipping wharf, a factory, and some office buildings. Terror spreads everywhere. The Blackhawk squadron participates in the search for the perpetrators, in cooperation with the USAF, but gets framed for starting a forest fire. (Drop tanks from their XF5Fs are found at the scene of a timber fire in a region they had been patrolling just moments earlier. A very powerful political official, who later turns out to be "Nitro," makes the accusation in a secret meeting in Washington DC.) Soon back at Blackhawk Island, Chop Chop spots a masked saboteur (Angie) planting a bomb on a Skyrocket; the team fans out and attacks him, taking him down, but as soon as he's dragged into the HQ building, he detonates some nitro, flees the building, and rejoins his backup team (two snipers) to flee the island in a speedboat. Soon at the bad guys' secret island base, "Angie" is exposed by Nitro (wearing a fright mask) as Blackhawk in disguise; Nitro punctuates his displeasure by gunning down the two fools who brought Blackhawk to the island. Meanwhile Hendrickson and the Blackhawks have used radar to find Nitro's base, and are flying to the rescue. Nitro rants long enough about his grandiose takeover scheme to allow them time to arrive. In the final fight scene, hemmed in by Blackhawks, Nitro refuses to surrender and tries to rally his henchmen; he's killed with a submachine gun by one of his own henchman.

Retrieved from "https://heykidscomics.fandom.com/wiki/Modern_Comics_Vol_1_73?oldid=740382"
Community content is available under CC-BY-SA unless otherwise noted.