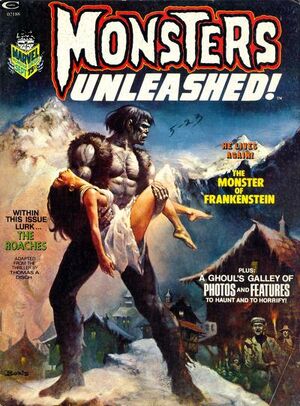 A neuroscience student and his girlfriend locate Frankenstein's monster at a freak show carnival exhibit and the man wishes to buy the creature from the carnival owners but he is refused. He returns to the motel and has an argument with his girlfriend who thinks he has become obsessed with the creature. The man falls asleep and the woman resolves to return him to sanity by destroying the exhibit with fire. When she returns to the carnival and douses the exhibit with gasoline and starts the blaze, her hair catches fire and she is badly burned. The intense heat rouses the creature which goes on a rampage. Soldiers armed with a bazooka are called in and after it climbs to the top of the Ferris wheel, it is shot down where it lies motionless due to the electrical discharge.

Retrieved from "https://heykidscomics.fandom.com/wiki/Monsters_Unleashed_Vol_1_2?oldid=1446921"
Community content is available under CC-BY-SA unless otherwise noted.