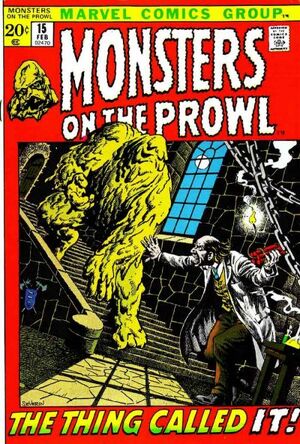 Synopsis for "Terror of the Pterodactyl!"Edit

While digging a new New York-New Jersey commuter tunnel, workers uncover the bones of a pterodactyl. The skeleton is 10 times larger than any other on record, failing to even fit inside the museum's lab. As as result, they put the specimen together at the Lunar Research Center of NASA. When an explosion in lab occurs due to experiments involving gasses from moon rocks, the skeleton is somehow brought back to life as a full fledged Pterodactyl which terrorizes the city. After going on a rampage and causing much destruction, the giant dinosaur sees its reflection in a huge mirror. It flies straight into it, killing itself in the process. The scientists come to the conclusion that the monster was lonely, looking for others of its kind.

Retrieved from "https://heykidscomics.fandom.com/wiki/Monsters_on_the_Prowl_Vol_1_15?oldid=1446901"
Community content is available under CC-BY-SA unless otherwise noted.