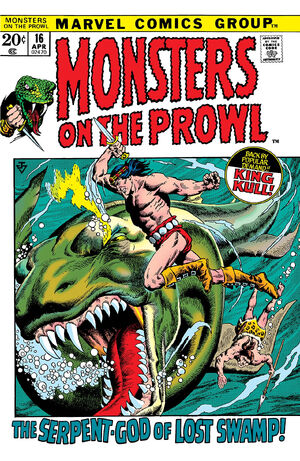 Appearing in "The Forbidden Swamp"Edit

Synopsis for "The Forbidden Swamp"Edit

King Kull, along with his friend Brule and a group of Red Slayers enter the Forbidden Swamp, trying to locate the Temple of the Serpent-Men believed to be hidden within. They kill several Serpent-Men along the way until they finally spy the temple on the other side of a large river. They fashion a raft out of logs and attempt to cross the river when they hear chanting from three Serpent-Men priests. The chanting brings forth a giant river dragon, which nearly kills the group of adventurers. They manage to get across the river, however, and kill the priests with Kull proving immune to their weapons. Kull alone enters the temple where he encounters Thulsa Doom, who claims that he had come to the temple to rescue his beloved, but was too late as her body lay prostrate across the alter. Kull invites Thulsa back to his city despite the protestations of Brule and the others who have heard rumours of the lord's evil ways. Kull dismisses their warnings, however, saying that he will be welcome until he does something to make himself unwelcome.

Retrieved from "https://heykidscomics.fandom.com/wiki/Monsters_on_the_Prowl_Vol_1_16?oldid=1446902"
Community content is available under CC-BY-SA unless otherwise noted.