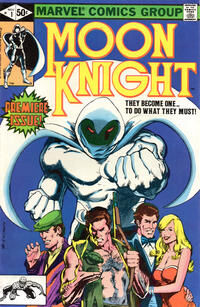 I'm a ghost now...a spectre of the moon...the moon's knight of vengeance---and I got work to do.

Appearing in "The Macabre Moon Knight!"Edit

Synopsis for "The Macabre Moon Knight!"Edit

Mercenary Raoul Bushman and his lieutenant Marc Spector lead a raid on a rebel camp in Sudan. Jean-Paul "Frenchie" du Champ arrives in a helicopter and tells Spector that he has looked through Bushman's secret papers. The information confirms their resolve to quit working for Bushman. Frenchie also has their new orders: attack the village of Selima. Spector points out that there is no rebel activity there. Bushman has learned that an archaeologist has found a tomb there, so they are going to loot it.

That night the mercenaries ride into Selima. Dr. Peter Alraune, the archaeologist, knows of Bushman and realizes why he's there. Taking up a dagger found in the tomb, he strides directly toward Bushman's back. Spector warns Bushman and disarms Alraune. He watches Bushman kill Alraune with his steel teeth. Before he dies, Alraune tells Spector where to find his daughter. While Bushman admires the dagger, Spector goes after Alraune's daughter, Marlene.

Spector tells Marlene that her father is dead. She recognizes that he is a mercenary and blames him. He says, "Yeah ... I killed him! And I'll kill you unless you get out fast, woman!" She gets in a jeep and leaves.

Later, Spector finds Frenchie and tells him that they must follow Marlene, but he sees Bushman order the execution of innocent villagers. He has finally had enough: he attacks Bushman, who drops him with one punch and tells an underling to "take him out in the desert and dump him! Let the sun, the heat he despises so, slay him!"

Spector wakes at dawn in the desert, with no shelter and no water. He walks all day. At night a storm comes up. Two Arabs spot him silhouetted against the moon, notify Marlene, carry him into the tomb of Pharaoh Seti, and lay him out. She recognizes him: "he deserves to be dead!" And as far as Jallad can tell, he is dead.

Marlene, with a moment to think, realizes that Spector probably saved her life and has now paid for that mercy with his own life. Suddenly, though, Spector sits up! He's not sure who he is, but he knows the idol in front of him: Khonshu, a god of the moon, "the Taker of Vengeance, a figure of terror." He puts on the idol's cloak. He drives Marlene's jeep into Selima. He knifes two of Bushman's men and takes their grenades.

Bushman and his men are celebrating their victory in the town square. Two trucks explode near the ammo dump. When the men investigate, the dump itself explodes. Only Bushman remains. Spector confronts him. He hears a scream behind him; Marlene followed him, and Frenchie caught her. When Spector turns around, Bushman has vanished.

Marlene learns that Bushman, not Spector, killed her father. Then Spector collapses.

In the present, Spector finishes dictating into a tape recorder. He tells Marlene that Bushman is active in New York: "Had a weird feeling about this ... like I should tape Bushman's story before I left." He also tells her to stay behind. Spector, as Jake Lockley, goes to the diner. He asks an informant, Bertrand Crawley, about a death's-head medallion found during a heroin bust. It's the symbol of a new gang, Crawley tells him, run by someone named Bushman. He "operates out in the open ... almost as if he wants to be found." His base is near 99th and Amsterdam in Harlem. Frenchie, in the new helicopter, picks him up and takes him to meet Bushman. Spector fails to notice a Mercedes following him.

Moon Knight walks into the nightclub, with no attempt at subterfuge: "Tell your boss I'm about to walk into his trap." In the upstairs office, he handles a few thugs. A door swings open. On the desk inside he finds the dagger from Seti's tomb. Another door opens to reveal Bushman. Outside, the Mercedes pulls up and Marlene gets out; she wants revenge on Bushman as much as Spector does. She walks into the office. Bushman fires at Spector and misses. He fires at Marlene and hits! He knocks Spector down. Spector blocks Bushman's teeth with his truncheon and begins to beat him.

Marlene regains consciousness. She convinces Spector to stop before he kills Bushman: "I didn't want Bushman to spoil what he started ... what you've made into a legend." They hear sirens and leave in the helicopter. The police walk in and find a silver crescent in the windowsill, casting its shadow across Bushman.

Retrieved from "https://heykidscomics.fandom.com/wiki/Moon_Knight_Vol_1_1?oldid=1516155"
Community content is available under CC-BY-SA unless otherwise noted.