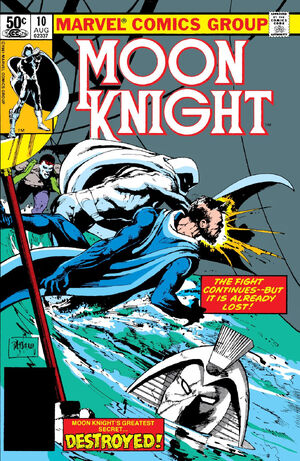 You are someone! You're exactly what you've chosen to be—a strong man determined to make up for the evil you once did. You're not Lockley or Grant or even Moon Knight—they're just your tools ... names and identities you use to accomplish your goal.

Appearing in "Too Many Midnights"Edit

Synopsis for "Too Many Midnights"Edit

Bushman, Moon Knight's nemesis, has trapped him in a chamber rapidly filling with stormwater. The Midnight Man, who lured Moon Knight into this trap, and Samuels, Steven Grant's butler, also face drowning. Even worse, the Midnight Man has just shattered the statue of Khonshu that, Moon Knight believes, gave him his powers (see issue #1).

On the street above, Marlene Alraune and Frenchie find Lockley's cab and the open manhole that led Moon Knight into the trap. Back in the chamber, Samuels and Midnight Man plead with Moon Knight to find a way out. He shakes off his lethargy and uses one of his darts to start prying a brick out of the wall. By the time he loosens the brick, the water has risen over his head—the rush of water through the new opening almost takes him with it. He barely makes it back to the surface. Midnight Man plunges in to escape through the hole. Moon Knight cuts the rope holding Samuels just as the wall around the inlet collapses. The current pulls Samuels into the sewers. Moon Knight retrieves the statue's head and follows; his cloak catches on a brick and is lost. They wind up in the river.

On a riverbank, Moon Knight pulls off his mask and tells Samuels, "I'm nothing ... everything to everyone, but nothing to myself." He wanders away, clutching the head of Khonshu. Samuels returns to Grant's mansion. Marlene calls Gena Landers, who sets Crawley and her sons to work looking for Lockley. Frenchie uses the new helicopter to search the city. Even Samuels joins the hunt. After three days, though, no one can find him. In Moon Knight's absence, Bushman begins a crime wave.

Finally, Gena and Crawley find Moon Knight in Central Park, where he grieves for his brother Randall, who (he believes) died nearby. They take him to Grant's mansion, where Marlene tries to pull him out of his despondency. "I jeered the moon once too often, lady, bluffed my way through too many midnights," he says. Marlene shows him another statue of Khonshu and says that the one Midnight Man broke was a copy—this one is the original. "You did it all to yourself," she tells him.

Five days later, Crawley learns that Bushman and his lieutenants will hold a meeting at a house in Brooklyn that night. Marlene gives Moon Knight a new costume, and Frenchie fires up the new chopper. They arrive as Bushman pulls up to the house and sees a group of police out front. Before Bushman can escape, Moon Knight swings down on his chopper's ladder. "It can't be!" says Bushman, "You're dead!" The answer: "You can't kill me—nothing can!" Bushman tells his driver to plow through the police. Moon Knight glides down onto the car and knocks out the driver, causing the car to crash. Bushman runs into the Botanical Gardens. Moon Knight ducks a burst from Bushman's Sten gun and attacks. With his confidence restored, Moon Knight easily bests his opponent.

Back at his mansion, Grant asks Marlene if the statue of Khonshu she showed him is the copy, rather than the one he saw shattered. She says, "It's all in your mind anyway. If this one is the fake, then you've proven it—by defeating Bushman without the spirit of Khonshu."

Retrieved from "https://heykidscomics.fandom.com/wiki/Moon_Knight_Vol_1_10?oldid=1510099"
Community content is available under CC-BY-SA unless otherwise noted.