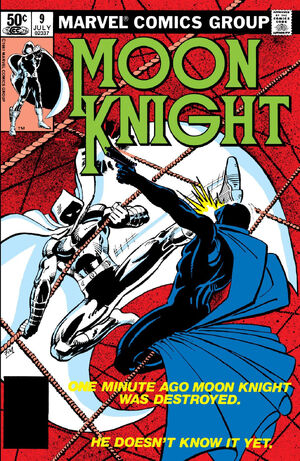 I believe you called me 'refreshingly psychotic.' Now, however, only the latter half of the description applies.

Appearing in "Vengeance in Reprise"Edit

Synopsis for "Vengeance in Reprise"Edit

In a gathering storm, Moon Knight watches a tall building from a nearby rooftop. The Daily News says that Bushman has escaped from a maximum security pen. Moon Knight glides across the street and crashes through a window, into an underworld casino.

At Steven Grant's mansion, Marlene Alraune tells Samuels about the statue of Khonshu and the birth of Moon Knight (see issue #1). Does Khonshu's spirit actually inhabit the body of Marc Spector, or does Spector only think so? Only Khonshu knows for sure. Elsewhere in the building, Frenchie works on the new helicopter (the old one crashed into Lake Michigan in issue #7).

Moon Knight pacifies a few goons and asks about Bushman. He notices one goon slipping out a back door and follows the man's Cadillac in Lockley's cab.

Awakened by thunder, Marlene sees a man in a mask. She screams, which brings Frenchie. The masked man knocks down Frenchie and escapes. Marlene and Frenchie see that the statue of Khonshu is missing, and Nedda says that Samuels is missing.

Lockley finds the Cadillac parked beside an open manhole off 34th Street. He calls Marlene to update her; she doesn't tell him about the statue. He spends an hour searching the tunnels, with the water rising, before hearing a noise. It came from a very high room, strung with rope like a spiderweb. He begins to climb.

Marlene realizes that the intruder might have wanted the statue for its artistic value. She goes to the mansion's gallery. Anton Mogart's opera cape is also missing, so the thief was Midnight Man (introduced in issue #3). They head for 34th Street.

Mogart swings down and knocks Moon Knight into the web. He says that, after he survived his fall into the river, he drifted under a drain that poured chemical waste on his face. He hid in the sewers for three days. When he returned to his mansion, the police had confiscated his art collection. To add injury to insult, the chemicals had burned his face. To get revenge, he stole the statue of Khonshu. Now he pushes it off a high platform. Horrified, Moon Knight sees it smash to bits.

Mogart begins shooting at him. Driven by instinct, he leaps and swings, dodging the shots, until he captures Mogart and demands to know where Samuels is. Bushman appears on a higher platform with Samuels and the goon that led Moon Knight here. He pushes a plunger, blowing a hole in the wall. Stormwater begins to fill the chamber ....

Retrieved from "https://heykidscomics.fandom.com/wiki/Moon_Knight_Vol_1_9?oldid=1510126"
Community content is available under CC-BY-SA unless otherwise noted.