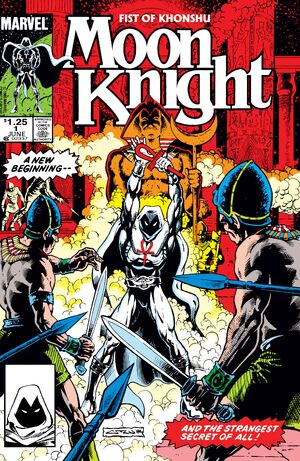 Sorry Marlene. This time I have to go with the voices in my head.

Appearing in "Night of the Jackal"Edit

Synopsis for "Night of the Jackal"Edit

Marc Spector aka Moon Knight has used his vast fortune to establish the Spector International Art Gallery. One of the premier pieces on display at his auction is none other than the statue of Khonshu – the Egyptian God of the moon. Marc has been in possession of Khonshu for years, but since he recently decided to abandon the Moon Knight persona for good, he has decided to sell the statue. An agent working for Ahmad Azis enters the gallery and uses a poison-tipped walking cane to assassinate all potential buyers. The agent bids on the statue and upon winning the auction has it shipped to Azis on Failaka Island off the coast of Kuwait.

Marc meanwhile, is enjoying the life of a millionaire with his paramour Marlene Alraune. Marlene was partially responsible for Marc first becoming Moon Knight, and in the defense of their relationship, she is also responsible for ending Moon Knight. But giving up is not that easy for Marc. That same evening, he has a dream of Khonshu speaking to him. Khonshu warns him of encroaching evil in the sands of Egypt. Marc can not ignore the dream and makes preparations to visit Egypt to check it out. Marlene will not condone anything that may lead Marc on the path of Moon Knight once again. She tells him that if he leaves, she won't be waiting for him when he gets back.

As Azis receives the statue of Khonshu, he enters a golden temple, painstakingly remade to resemble the temple of Anubis centuries ago. Azis was once known as Araamses, brother to Pharaoh Seti I. When Seti died, Araamses, a priest of Anubis attempted to take the throne for himself. He failed however, and as punishment was mummified and imprisoned within Anubis' temple. Like Marc Spector, Araamses was later resurrected to serve his god, much how Marc once served Khonshu. Now that he has the statue of Khonshu, he seeks to take from it its power and reign supreme. Azis takes on the name and form of Anubis.

Marc travels to the Valley of the Kings in Thebes. He finds a hidden cave containing the Priests of Khonshu. The immortal priests have been waiting for this day for millennia. They outfit Marc with new weapons and tell him that he must become Moon Knight again. When the full moon rises, Marc will find his strength greatly increased. And the enchanted weapons are to aid him in his new role as Fist Of Khonshu.

Marc goes to Failaka Island to seek out Anubis. He fights up against a group of Bedouins and allows himself to be captured. The Bedouins take Moon Knight to the new Temple of Anubis. Anubis enters and tells Moon Knight that the agent of Khonshu is the only that stands in the way of his power. He has searched for Khonshu for years, but it was only recently when the statue was placed in the general population that he became aware of Moon Knight. Moon Knight breaks free of the straps binding him and begins to face Anubis. Anubis fires lasers from the eyes of his helmet, but Moon Knight manages to avoid them. Marc takes the golden Ankh from his arsenal and uses it to strike Anubis down. The blow ruptures the power inside of Anubis' helmet and he stands defeated. Suddenly, a massive sandstorm erupts out of nowhere and swallows everything in the temple including Anubis. After the storm settles, the only thing left is Marc and the statue of Khonshu. Moon Knight arranges to have the statue returned to the United States.

Retrieved from "https://heykidscomics.fandom.com/wiki/Moon_Knight_Vol_2_1?oldid=1516184"
Community content is available under CC-BY-SA unless otherwise noted.