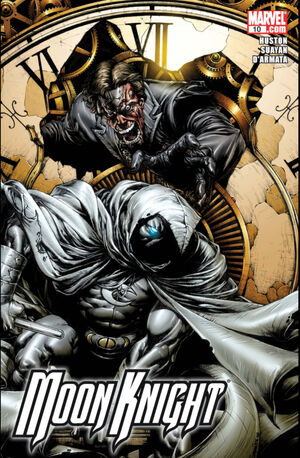 Marc Spector reflects upon his brother Randal - a man who was gunned down by the Punisher. Now he stands side-by-side with the Punisher, watching him from a rooftop as he uses a sniper rifle to gun down violent criminals. He thinks about the similarities between the two – and their differences. While the two talk, the subject of the Civil War is brought up. Frank asks him which side Spector has chosen. Marc replies that he hasn't chosen any side and is staying clear of the war. Moments pass, and Ray Landers arrives piloting the Moon-copter. Moon Knight ascends the ladder and leaves the Punisher to his calling.

Elsewhere, at Paul's Bar, the Profile sits and has a drink with a disfigured young woman. With his uncanny ability to "read" people, he pokes at her self confidence, baiting her into possibly accepting a date with him. He knows that the woman equates emotional abuse with affection.

Moon Knight arrives on the scene. The bar happens to be situated next to the tenement building where Moon Knight had his final fight with Bushman. Entering the establishment, Moon Knight finds the Profile inside the men's room. He drags him outside and begins beating him up, but the disfigured woman rises to the Profile's defense. Moon Knight wants the Profile to use his talents to find Midnight. He gives him a folder containing photographs and a full dossier on his former sidekick. The Profile, terrified of being brutalized any further, acquiesces to Marc's demands and tells him that he'll check on it. Before leaving, the Profile tells Moon Knight that the bartender likes to spend his evenings beating his wife with a steel belt buckle. Marc decides to pay the gentlemen a visit.

From a nearby sewer grate, Midnight and his female companion watches the tableau before them.

Retrieved from "https://heykidscomics.fandom.com/wiki/Moon_Knight_Vol_3_10?oldid=1722202"
Community content is available under CC-BY-SA unless otherwise noted.