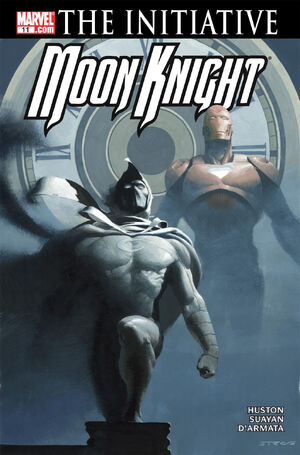 Marc continues to interrogate the Profile, demanding even more information concerning the whereabouts of Jeff Wilde, Midnight. The Profile makes a few untoward comments concerning Marc's lifestyle, and Marc punches him several more times. The Profile relents, and tells Marc that Wilde has taken up residence in his father's old hideout. Lighting a cigarette, the Profile shows a bit of bravery and tells Marc that Marlene doesn’t love him in anymore. Marc flies into a rage, but the Profile tells him that he could have her again, providing he is willing to listen to him.

Marc goes out to patch things up with Marlene, but he is unable to express his true emotions towards her. He is upset that Marlene has moved on with her life, and is now seeing someone half her age.

Later, Marc returns to his headquarters and dons his Moon Knight costume. He talks with Ray who preps the Moon-copter. Ray wants Moon Knight to take a gun with him, but Marc tells him that he doesn't need a gun to deal with Wilde. Ray reminds him that Wilde is not the same idealistic kid who once wanted to be Moon Knight's partner. Now, he's nothing more than a crazed cyborg.

Moon Knight tracks down Midnight to the original Midnight's underground hideaway. Midnight appears wearing a version of Moon Knight's costume. His cyborg nurse assistant and he attack Moon Knight and quickly overwhelm him. Midnight straps Moon Knight face down onto the face of a large clock and begins cutting into his spine.

Retrieved from "https://heykidscomics.fandom.com/wiki/Moon_Knight_Vol_3_11?oldid=1722203"
Community content is available under CC-BY-SA unless otherwise noted.