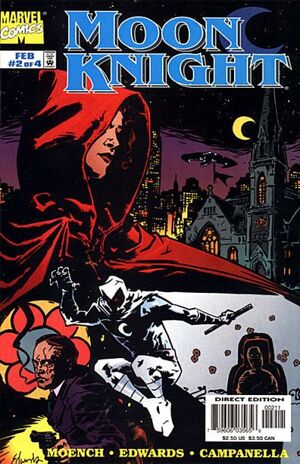 Could it be this unveiling forebodes the return of the Lunar Legionnaire?

Appearing in "The Bottom (Part II of VI) - Fear, More Than God"Edit

Synopsis for "The Bottom (Part II of VI) - Fear, More Than God"Edit

Having fallen to the floor from his wheelchair, Marc Spector reflects further upon the circumstances that led him to his present condition.

He had been fighting his first and most nefarious adversary, Bushman. The fight was brutal, as the two combatants exchanged blows on a rooftop. Bushman charged Moon Knight, sending both men falling several stories to the street below. Moon Knight suffered compound fractures to both of his legs.

Moon Knight slung a crescent dart into Bushman's throat, but the undeterred mercenary crawled across the hero's body, biting him deeply across the face. Consumed by pain and rage, Moon Knight finished Bushman off, using his crescent dart to slice the skin off of his face.

Back in the present, Marc's old friend, Bertrand Crawley arrives at Marc's home. He delivers Spector his pain medication, and tells him that an old friend has been asking about him – Frenchie. After Crawley leaves, Marc decides to forgo the pain medication.

Meanwhile, a strange man known as the Profile meets with a well-dressed stranger. They discuss their efforts to find Moon Knight.

Retrieved from "https://heykidscomics.fandom.com/wiki/Moon_Knight_Vol_3_2?oldid=1510105"
Community content is available under CC-BY-SA unless otherwise noted.