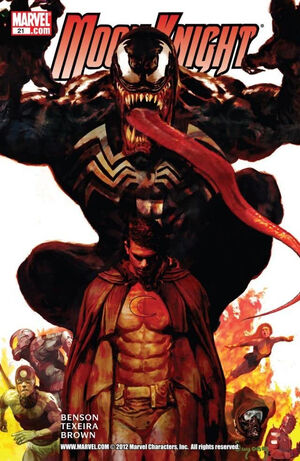 Appearing in "The Death of Marc Spector, Part 1 of 5: Hell on Earth"Edit

Synopsis for "The Death of Marc Spector, Part 1 of 5: Hell on Earth"Edit

S.H.I.E.L.D. is charged with tracking down the renegade Marc Spector, aka, Moon Knight, who is in gross violation of the Superhuman Registration Act. They bring in several of Marc's closest allies and interrogate them, including his former lover Marlene Alraune, his fellow-mercenary Jean-Paul Duchamp, and his butler Samuels. The results of the interrogation are inconclusive and S.H.I.E.L.D. director Tony Stark grows more frustrated with each passing moment.

Meanwhile, the Profile visits Michael O'Brien, one of Moon Knight's recent victims, in a state correctional facility. He feeds O'Brien's already unstable personality with thoughts of revenge, and promises that he will do everything in his power to get him out of prison.

Later, NSA agent Raymond Sikorsky addresses Tony Stark and Maria Hill aboard the S.H.I.E.L.D. Helicarrier. He brow beats them over their embarrassing failure to sanction Marc Spector. To punctuate his lamentation, he pulls the Spector case out of S.H.I.E.L.D.'s jurisdiction, citing that it is now an NSA matter.

In the city, Marc Spector, wearing a different masked outfit from his traditional garb, bursts into a housing project and beats up a crew of gang-bangers. He feels that working without the shadow of Khonshu hanging over his head is extremely liberating.

Elsewhere, another agency takes an interest in the Marc Spector case. Norman Osborn, head of the Thunderbolts, schemes to bring him down.

Retrieved from "https://heykidscomics.fandom.com/wiki/Moon_Knight_Vol_3_21?oldid=1722213"
Community content is available under CC-BY-SA unless otherwise noted.