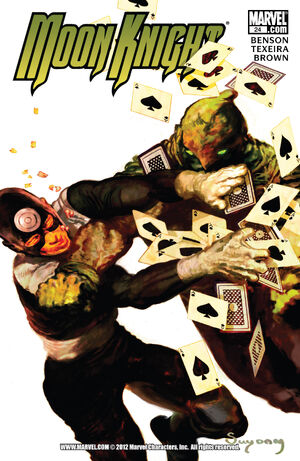 Venom leaps down from above and attacks Moon Knight in an alleyway. Moon Knight trips him up with some cable-line from his truncheon and uses the distraction to affect an escape. The other Thunderbolts intercept him and Moonstone knocks him back with a solar burst. The Swordsman tries to cut Moon Knight down to size, but he manages to unseat him with a sweep kick. The Radioactive Man sends Moon Knight reeling with a low grade radioactive blast. Suddenly, a S.H.I.E.L.D. hovership arrives on the scene and orders the Thunderbolts to stand down. Moonstone pulls rank on them and tells them that their presence is in violation of the Superhuman Registration Act. While Moonstone argues with the S.H.I.E.L.D. commander, Moon Knight gets away.

Moon Knight regroups with Frenchie at his secret headquarters at Spector Mansion. Frenchie is still enraged over the recent attack against him and his lover Rob. Marlene Alraune telephones Frenchie from the hospital to tell him that Rob's condition is stable, but with no improvements. She also tells him that S.H.I.E.L.D. agents are scouting the area, looking for Marc. It is believed that the attack against Frenchie and Rob was done to lure Moon Knight out into the open.

Marc and Frenchie meet up with Ray Landers to cover the next step of their strategy.

At Thunderbolts Mountain, Norman Osborn, incensed over the Thunderbolts' failure to sanction Moon Knight, decides to call upon the services of the assassin Bullseye.

Retrieved from "https://heykidscomics.fandom.com/wiki/Moon_Knight_Vol_3_24?oldid=1722216"
Community content is available under CC-BY-SA unless otherwise noted.