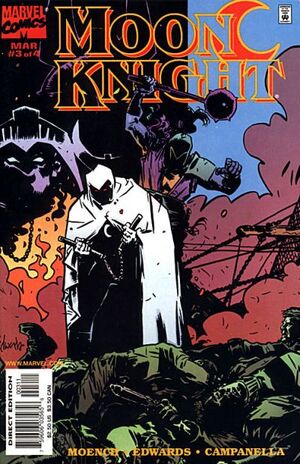 At the offices of the Committee, one of the staff members gives a slide show highlighting the early military career of Marc Spector. A Committee consultant known only as the Profile interrupts the demonstration complaining about relevance. He takes over the meeting, and gives an extensive account of the events that transformed mercenary Marc Spector into the Avatar of Vengeance, Moon Knight.

Meanwhile, Marc visits the restaurant of his former pilot and colleague, Jean-Paul "Frenchie" Duchamp. Frenchie introduces Marc to his partner, Rob. Marc mistakenly believes that Rob is Frenchie's partner in the business, but Frenchie corrects him, revealing that Rob is actually his life-partner. Marc is stunned. For as long as he's known Frenchie, he never suspected that the man was actually gay. Frenchie says that he's always told Marc that he loved him, but Marc never realized the full implications of such a statement. Marc grows very angry, not because Frenchie is gay, but rather because he lied to him for so many years, even when everyone else around them knew the truth.

Back at the Committee offices, the Profile continues with the slide show. He details Spector's history with Duchamp, as well as with the bloodthirsty mercenary known as Bushman. Spector cut ties with Bushman several years ago during an incident in Egypt. It was this same incident that led Marc to discover the Statue of Khonshu – the Egyptian God of Vengeance. Khonshu gave Spector renewed life and purpose, and from there he adopted the guise of Moon Knight.

As the Committee members continue their discussion, Frenchie walks home with his lover, Rob. A man emerges from the shadows and brutally attacks them. He tears off Frenchie's artificial leg and beats him into a bloody pulp. Frenchie is taken to the hospital, and Marc's valet, Samuels, informs him of the news.

Marc visits Frenchie, then goes out and tracks down the assailant. He brandishes a sword and stabs the man through the mouth.

Back at the Committee offices, the board members discuss their recent actions against Moon Knight. Prior to this current consultation, the Committee had hired Bushman to fight Spector. They didn't want to kill him, but rather destroy him by giving him a debilitating injury that would break his spirit. One of the Committee members speaks up and announces that he has initiated a plan of action known as the Duchamp Contingency. The Profile knows of the Duchamp Contingency and admonishes the Committee man for his brash course of action. They have now just given Marc Spector a reason to live.

A senior member announces that it is now time to enact Contingency T. One of the Committee's hired guns, the Taskmaster, enters the room. He takes two ballpoint pens and hurls them at the man who authorized the attack against Frenchie. The pens spear each of his eyes. The Taskmaster quips that he'll be adding the pens to his expense report.