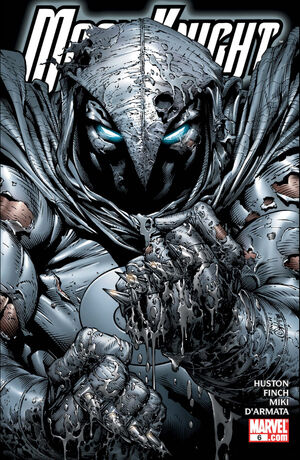 Taskmaster rises from the wreckage of the building and points his sword towards Moon Knight. Moon Knight dares him to try and kill - just to see if it'll actually work this time. Taskmaster grows terrified and drops his sword. Moon Knight withdraws one of his crescent darts and slices away at Taskmaster's mask. He leaves the villain wallowing in terror, grabs the Committee's files on himself and dives out the window. From the street below, the Profile looks up, and upon seeing that Moon Knight is still alive, throws up.

Marc returns to his apartment where he cuts his hair and shaves. He then drives down to the Natural History Museum to see Marlene. Marlene is content with the direction her life has taken, and has no interest in getting involved with Marc again.

Marc then goes to visit Jean-Paul. Frenchie's boyfriend is present and helps to outfit him with a new prosthetic. Marc and Jean-Paul help each other to the therapy pool.

Marc then visits his investment counselor who informs him that due to a patent on DNA sequencing, Marc may soon be a wealthy man again. Afterwards, he returns home where he finds Crawley waiting for him. Marc apologizes for his recent brash behavior.

When he's alone, the spirit of Khonshu rises, taking the form of Marc's late adversary, Bushman. Khonshu reveals that he inspired the Committee to reform and send Bushman after him. He needed Marc to get back into the game as Khonshu's avatar of vengeance. Marc is furious at the revelation and smashes the face of the statue of Khonshu. Khonshu causes Marc to collapse onto the floor, dead, then quickly resurrects him. This demonstration is but a reminder of the fact that Marc is forever Khonshu's servant.

Later, Marc dons the costume of Moon Knight and leaps out into the night.

Elsewhere, the villain known as Midnight conspires with a young woman. There is blood all over the floor, drawn in the pattern of a clock.

Retrieved from "https://heykidscomics.fandom.com/wiki/Moon_Knight_Vol_3_6?oldid=1722198"
Community content is available under CC-BY-SA unless otherwise noted.