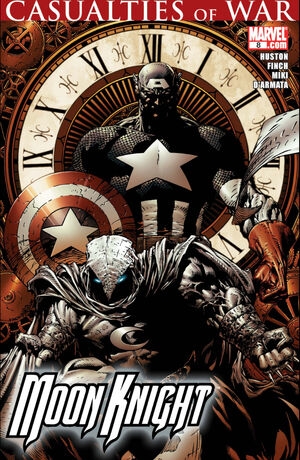 Flashback:
It is the early 1990s and mercenaries Marc Spector and William Cross are stationed on top the roof of a building. Marc aims a high-powered sniper rifle at a building across the street, just as military officials escort a prisoner across the quad. He executes a blond haired woman who apparently revealed highly classified state secrets. Cross indicates that she had been previously brainwashed, and that she only revealed information already programmed inside her mind. Executing her was done merely to make the Germans and the Russians nervous.

The Present:
Captain America stands in Marc Spector's mansion in his civilian attire. Addressing by his former rank of sergeant, he warns Spector to stay clear of events involving the current civil war. Spector's maid, Nedda, comes into the room and tells Cap how she grew up admiring him. Distracting Marc even further is Khonshu. Adopting the visage of the late mercenary Bushman, Khonshu urges Marc to kill Captain America. Fortunately, Marc has grown quite accustomed to ignoring Khonshu's violent demands.

After Cap finishes speaking, Marc fires back, criticizing the war, and comparing it to a sordid love affair between Steve Rogers and Tony Stark. He goes on to say that Steve that Tony are "trying to prove who has the bigger super power". Having settled very little, Cap repeats his warning and exits the mansion.

Marc later goes out as Moon Knight. He meets up with Detective Flint who has been investigating a recent string of murders. The crimes have all the earmarks of the Midnight Man, but for the fact that the original Midnight Man died several years ago. Flint even disinterred Mogart's remains and tested his DNA just to be certain. Moon Knight tells Flint that he'll look into it.

While on patrol, Moon Knight comes upon a hood attacking a young woman. He brutally dives into him, wrapping him up with a length of chain. Later, Marc returns home where he meets with his physical therapist.

Elsewhere, the mysterious Midnight killer claims another victim. He cuts off their arms and legs and begins swinging them overtop his head in glee.

Retrieved from "https://heykidscomics.fandom.com/wiki/Moon_Knight_Vol_3_8?oldid=1722200"
Community content is available under CC-BY-SA unless otherwise noted.