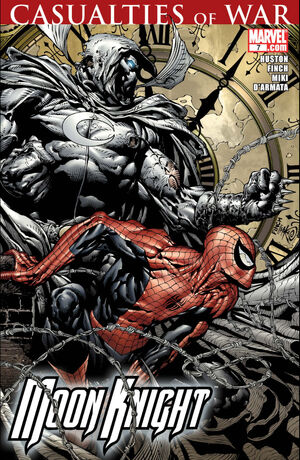 • Season 2 of MOON KNIGHT begins with a new creative team and a black-out!

• When the entire city is thrust into darkness by a threat, Moon Knight’s must use all of his weapons (and personalities) to defeat a new foe!

• Brian Wood (X-MEN, DMZ) takes the writing reins picking up from where Ellis left off pushing questions from MOON KNIGHT #1 back to the fore and amplifies them 100-fold!

Retrieved from "https://heykidscomics.fandom.com/wiki/Moon_Knight_Vol_5_7?oldid=1447032"
Community content is available under CC-BY-SA unless otherwise noted.