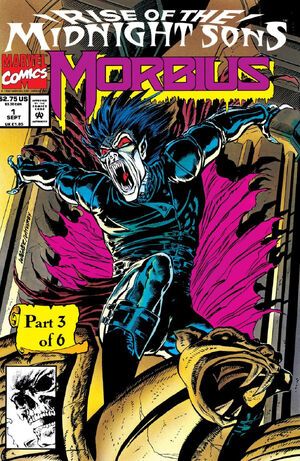 Appearing in "Rise of the Midnight Sons, Part 3"Edit

Synopsis for "Rise of the Midnight Sons, Part 3"Edit

When we first see Morbius, he is mad with hunger, stalking the rooftops of New York by night. He scents out a victim, an unnamed redheaded woman, and attacks. After draining her, he returns to his senses, including his sense of remorse.

Meanwhile, at the club Limelight, Lilith and Pilgrim enter, with Blackout punching his way through the crowd to make a path. Lilith complements the "malevolent ambiance and music"; Blackout explains that the club used to be a cathedral, and the music is speed metal. Lilith makes a note of it, and says she may tarry a bit, once she has what the came for. Reaching the center of the crowd, they come across two revelers -- actually the slightly surprised Lilin, Nakota and Fang -- who bow before Lilith.

Elsewhere, in Times Square, Ghost Rider and Johnny Blaze ride in search of Blackout. Ghost Rider can sense some dark events about to transpire, but is unsure of exactly what. It is a sense he finds unsettling. The only clue in their search is a woman's name and a hotel room number. Arriving at their destination, Ghost Rider covers his flaming skull with a riding helmet, and they knock on the door, bringing them face to face with Martine Bancroft. Explaining their search so far, they ask what she's doing in town. She reveals she is searching for her fiance, Michael Morbius. As Blaze examines a picture, he says he remembers the name. Ghost Rider immediately snaps up the picture, exclaiming that the man is one he had seen in his visions, though not as pictured. When Martine demands to know just who he is, Ghost Rider removes his helmet.

After overcoming a brief shock, Martine pours herself a drink and says she doesn't want to know. Martine explains she doesn't know much about Morbius' background: he had already won the Nobel Prize by the time she met him. They fell in love and got engaged, neither knowing that Morbius himself had a rare blood disease. When Morbius found out, he worked frantically on a cure, eventually turning to untested methods, such as serums extracted from vampire bats and electro-shock. The process cured him, but transformed him into a living vampire. Martine relates how he nearly killed her, that his "vampirism" had gone into remission, but had relapsed after an encounter with Dr. Strange, and that she knew he had recently fought Spider-Man. Her plan was to find him and bring him to a biologist who may have the potential to cure him. Barring that, she planned on putting him out of his misery. Ghost Rider and Blaze agree to accompany her.

Before setting out, she makes a call to the biologist she found -- Dr. Langford -- in his lab, and tells him she and her new help will pick him up on the way. Ending the call, Langford muses that Morbius was too brilliant for his own good. "If you had accepted your disease, you'd at least be resting in peace by now," he says to himself, "and if you hadn't written so many brilliant unpublished papers during your remission, then you wouldn't have attracted so much of the wrong kind of attention." It was Morbius' detailed notes of his condition which allowed Langford to synthesize a serum which would prove fatal to him, all while looking like an honest attempt at a cure under an autopsy. He makes a call to Dr. Paine's men, stating that "everything is proceeding according to plan."

Back at the Limelight, Lilith uses Nakota's clairevoyance to spy on Ghost Rider, Blaze, Martine and Morbius. She sends Fang to find Morbius, sensing an opportunity to corrupt him.

Martine, Langford, Ghost Rider, and Blaze finally arrive at the warehouse where Martine believes Morbius has made his lair. When the team enters the warehouse, Morbius breaks through an interior door, threatening them to be gone or else. Morbius is stopped in his tracks when he sees Martine, and hides his face in shame of what he's become. Martine begs Morbius to let them help him, but Morbius tells her that he fears there is no cure for him but death... but not today! With that exclamation, Morbius dives through the window, only to be brought down by a combination of one of Blaze's hellfire shotgun blasts and Ghost Rider's chain. The teams captures him while he is stunned.

Back at Langford's lab, Fang slips in by transforming into a liquid form. Finding Langford's serum, Fang "poisons" it with his own demonic blood. While demon blood is normally extremely lethal, when mixed with Langford's deadly formula alchemical and chemical processes warp it into something new and unpredictable. Langford later noted that the serum had changed color, but thought little of it and injected a bound and unconscious Morbius anyway. Langford was shocked when Morbius not only survived, but began to mutate and then broke free of his bonds. Morbius dives out the window, and Langford is left muttering to himself in shock as the others rush into the room. Ghost Rider and Blaze go to recapture Morbius while Martine sobs to herself, and Dr. Langford calls Paine's men to tell him there's been "a complication".

As dawn rises, Morbius begins to burn, and he realizes he must find shelter quickly. Finally, it occurs to him that he has one friend nearby: Jacob Weisenthal. Jacob -- an M.D. specializing in Family Practice and Internal Medicine -- is enjoying his morning tea when Morbius comes crashing through the large picture windows of his brownstone. Morbius falls unconscious, waking nine hours later. Morbius is shocked to find he is back in his human form, although Jacob is quick to say he can't take credit. As Morbius goes over the labwork Jacob has drawn on his mutation, Morbius notes that it can't possibly be stable. As if on cue, Morbius painfully begins to turn again. While Morbius struggles with his bloodthirst, Jacob tells him that he might be able to work out a treatment -- extend Morbius' normal periods -- if he gets a sample of the serum that mutated him.

Morbius tells him he will get it, but that he will need more protection than his tattered costume can provide. At Thrash + Gaudeville, Morbius finds a full-leather outfit (with cape) that he suspects will give him a good amount of protection.

While Morbius flies off to find his next meal, Martine returns to Dr. Langford's lab. She approaches unnoticed, and find Langford arguing with three similarly-dressed men. (We will later learn that these three are some of Dr. Paine's "Orderlies".) After hearing Langford tell the men the escape was not his fault, and that the dose should have been fatal, she is noticed. Martine calls the four of them scum, and pulls out the gun she had brought to finish of Morbius. Martine fires a few shots at their feet, but none are harmed. Langford wrestles the gun away and shoots her in the chest.

Drawn by the scent of fresh blood, Morbius is drawn back to Langford's lab, where he finds a dying Martine. He is there to hold her when she dies, but afterwards the hunger comes back upon him, and he drains her, sobbing the whole time. Morbius vows to end his own life before any more die, but not until he's had his revenge. Just that moment, the four men return. Morbius quickly slays the Orderlies, and Langford accidentally reveals that he killed Martine while begging for his life. With broken beakers of chemicals igniting around them, Morbius drains Langford, then throws his body out the window. For the first time in his life, Morbius finds he has killed with no remorse, only satisfaction. It is only after collecting the beaker of serum that Morbius notices the blaze around him. He dives for the window, but is also half blown out by an ensuing explosion.

Morbius is surprised to find Ghost Rider and Blaze below, even as Ghost Rider keeps the beaker of serum from crashing to the ground. When Ghost Rider demands to know what happened, Morbius tells him of Langford's treachery and Martine's death. Unsatisfied, Ghost Rider uses his penance stare to sort things out. Although confronted by apparitions of the many people he's killed, Morbius tells Ghost Rider he's seen nothing he didn't already know. Ghost Rider find himself in a quandry, as Morbius has remorse, but can't be allowed to continue slaying innocents. Morbius then vows to drink only the blood of corrupt. Ghost Rider tells him that the path he has chosen is thornier than he suspects, but that he will not interfere. All three depart before the first-responders arrive.

Back at the Limelight, Lilith curses that Morbius has escaped her grasp. After nearly choking Nakota, Lilith restrains her anger, and decides that there are easier mortals to prey upon than Morbius. She then asks a clearly exhausted Nokata to show her Victoria Montessi....

Later, at the Daily Bugle Building, Phil Urich gets a call from a source at the 73rd precint tipping him off about a "Jane Doe", Dead On Arrival with no blood in her body. Peter Parker recognizes the work of Morbius when he hears it, and resolves to do something about it... as Spider-Man!

Retrieved from "https://heykidscomics.fandom.com/wiki/Morbius:_The_Living_Vampire_Vol_1_1?oldid=1541596"
Community content is available under CC-BY-SA unless otherwise noted.