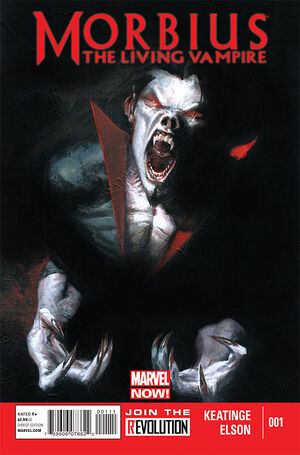 My name is Michael Morbius. I was a living vampire. Now, I'm a dead man.

Morbius is fleeing from three violent men with a wound near his shoulder. As he escapes into the subway and his wound slowly heals, he borrows a man's jacket and wraps it around the group's leader, a man with a blue mohawk wielding a shotgun. Morbius leaves him be, but one of his friends points a gun to his head. After fighting them off, he is distracted by their leader reaching for his shotgun, giving one of them the chance to hit Morbius over the head with a bat, followed by a shot in the chest with the shotgun by their leader.

Five days prior to this, Morbius had just escaped from the Raft and swam all the way to Barretto Point in the Bronx. He enounters a man named Justin and asks if he could get him a change of clothes. As he gets him new clothes, Morbius explains his situation to him. Justin warns him to leave New York before someone comes looking for him, but since Morbius has things he needs to do before he leaves, he instead suggests lying low in Brownsville, a rough neighborhood where super heroes are unlikely to find him.

Morbius spends four nights in Brownsville. The first night he witnesses a robbery, the second night he is hassled by a thief for his wallet, the third night was uneventful, and on night four he sees a woman named Wanda yelling at the man with a blue mohawk, who she refers to as Noah, for trying to convince her son to work for him. After warning him to stay away from them, Wanda storms off. Morbius tries to ask if she is okay, but she yells at him as well before walking away.

Wanda reminded him of his own mother, bringing him back to a time before he became a living vampire. He remembers living in Greece with his best friend Emil. But his rare blood disease weakened his immune system so much so that the potential of falling made going outside dangerous. He and Emil spent their adult years trying to find a cure for Morbius' condition. However, their research resulted in his transformation into a living vampire whose bloodlust drove him to kill Emil.

While digging through the trash for food, Morbius is approached by the thief from the other night, who has brought Noah along with him. The thief complains that Morbius wouldn't give up his wallet but Noah points out to him that he's homeless. Morbius ignores him for the most part, only bothering to talk when he remarks at how young the wallet snatcher is. Noah sends the thief away and starts questioning Morbius about his reasons for being in Brownsville. Morbius asks him politely to leave him be, but Noah instead punches him in the face, threatening him to stop asking questions about him and his friends.

Before Noah leaves, Morbius asks for his name. After he tells him his name is Noah St. Germain, the scene returns to the present, where Morbius is lying on the ground with a wound in his chest.

Morbius...the dead souled scientist. Morbius...the Living Vampire. Somewhere inside Doctor Michael Morbius is a good man who just needs a second chance. After escaping from The Raft in Amazing Spider-Man 699.1, Morbius is scraping desperately through each day trying to carve out a life in a world that has turned its back on him. However his redemption...may be worse than his sin. NOW Morbius returns in this long-awaited ongoing series, where the line between hero and villain becomes brutally and bloodily blurred.

Retrieved from "https://heykidscomics.fandom.com/wiki/Morbius:_The_Living_Vampire_Vol_2_1?oldid=1447090"
Community content is available under CC-BY-SA unless otherwise noted.