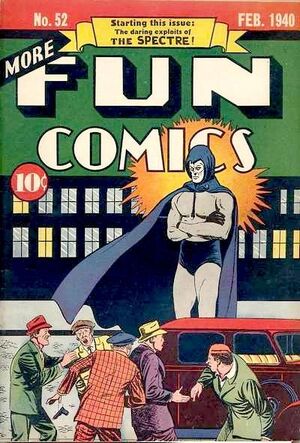 I should be driving toward Clarice's party -- but this tip is too important to pass up!

(adapted from plot summary at dcindexes.com)
-- Detective Jim Corrigan receives a tip from a stoolie about a robbery at a fur store. He single-handedly breaks up the robbery, earning the ire of gang boss, Gat Benson. Benson has Corrigan and his socialite girlfriend Clarice kidnapped. Corrigan is then sealed in a wooden barrel of cement and thrown off a pier.
-- After his death, Corrigan’s spirit is stopped from entering Heaven by a bodyless Voice, which tells Corrigan that he must remain on Earth to battle crime with supernatural powers. Corrigan awakens in the water next to his dead body. He rises up with newfound powers bounded only by his will. Hearing Clarice scream from the docks, and walking through a solid wall, Corrigan enters the warehouse to dispose of his foes.
-- To Be Continued.

Plot summary adapted from comicsodyssey
Continuing from last issue, Wing Brady and his men are defending Fort Miranda from an Arab tribe known as the Touaregs. Wing uses some rudimentary tactics to defeat them.

Retrieved from "https://heykidscomics.fandom.com/wiki/More_Fun_Comics_Vol_1_52?oldid=1519716"
Community content is available under CC-BY-SA unless otherwise noted.