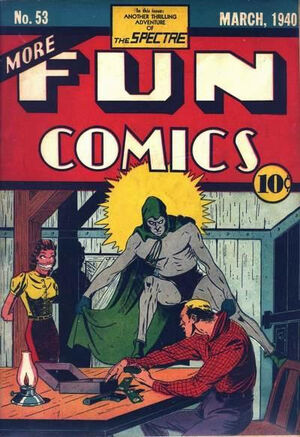 That's another thing I'm sorry about -- the engagement is off!

Appearing in "The Spectre Strikes!"Edit

Synopsis for "The Spectre Strikes!"Edit

[1] plot summary at dcindexes.com
-- Jim Corrigan, having recently been restored to life as the Spectre, enters the warehouse where his killers hold Clarice Winston. Corrigan frightens one man to death and touches two others, reducing them to a pile of bones. Clarice has been shot during the scuffle, but Jim revives her with a touch. Finally he summons the police. When the police arrive, Jim restores the hoods and turns them over to the police. Because he is not truly alive, Jim does not tell Clarice what happened. Instead he breaks off his engagement with her and makes a clean start. At his boarding-house room, with needle and thread, he fashions a green and white costume for himself, and begins his mission as the Spectre.

Retrieved from "https://heykidscomics.fandom.com/wiki/More_Fun_Comics_Vol_1_53?oldid=1519706"
Community content is available under CC-BY-SA unless otherwise noted.