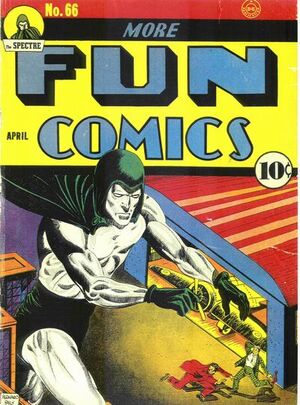 How can you hope to oppose black magic beyond all understanding, because it never existed?!

Appearing in The Spectre: "The World Within the Paintings"Edit

Synopsis for The Spectre: "The World Within the Paintings"Edit

(adapted from plot summary at dcindexes.com)
Cliffland is menaced by giant creatures. The Spectre tries to stop them while invisible, but is surprised that they can see him, and by green rays from the eyes of the creatures, which weaken him momentarily. Responding to a massive drum, the creatures then disappear inside a museum, with Spectre in pursuit, but they get away. Later Spectre interrupts two hoods holding up the Winston home, seeking the Ja-Set Ruby. The Spectre manifests separately from Jim, and deals harshly with the home-invaders, but breaks off the fight by freezing time in the room, and leaves to rescue a mass of cops from a squad of monsters. The Spectre materializes a protective invisible screen between the two sides, then shrugs off a second dose of the green rays. Spectre manually flings one monster into the depths of interstellar space, and punches another one into a million pieces, then pursues a third monster back to the museum. One painting, centuries old, shows some clouds that have shifted slightly since the Spectre's earlier visit; he dives into the picture. Once inside the painting, he finds the monsters assembling under the balcony of a metallic palace, harangued by an insane and evil hunchbacked man. This guy's beef is that he has never existed, so he plans to take over the material world. The Spectre confronts him, and black doom encircles Spec in its stifling folds. "How can you hope to oppose black magic beyond all understanding, because it never existed?!" But the Spectre is surrounded by a protective glow of pure light. The monsters rush up and attack the Spectre, but they melt in a torrent of oily fluid, as he stands firm. The unnamed hunchback flees toward the portal to reality, dropping some glowing globes to confuse the pursuing Spectre, but the Spectre shrinks himself (effectve how?) and dives thru the balls. This fight is visible in the painting in the museum, by a freaked-out guard. The hunchback turns out to be one of the monsters, just before Spectre leaps out of the painting, turns and incinerates it with a gesture, destroying this gateway into the real world. Finally, Spec returns to save Clarice from the hoods, sends a flying bullet back into its gun, then huffs and puffs and blows the thugs directly to the police station.

At a party, Inza meets a girl named Helen who is spotted like a leopard. The girl is distraught by her appearance and wants to kill herself. Inza is attacked by an intruder and summons Dr. Fate. The sorcerer uncovers a plot by Helen’s cousin Sarkiss to drive her to suicide, so he can collect the inheritance. Fate banishes the man and saves Helen from taking her life.

Retrieved from "https://heykidscomics.fandom.com/wiki/More_Fun_Comics_Vol_1_66?oldid=1513308"
Community content is available under CC-BY-SA unless otherwise noted.