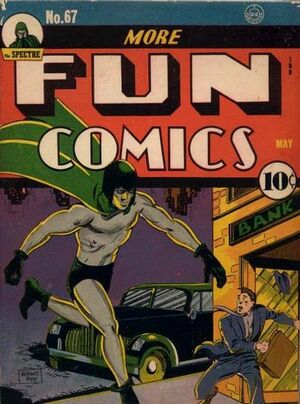 These shall be your garments, Kent Nelson. From this day on you shall be -- Doctor Fate.

Appearing in The Spectre: "The Incredible Robberies"Edit

Synopsis for The Spectre: "The Incredible Robberies"Edit

Cliffland is the scene of a series of robberies which police attribute to the Spectre. Spiritualist Deeja Kathoon offers to summon and capture the Spectre for the police. He succeeds in summoning Jim Corrigan's astral self, but ordinary methods can not contain him. Spectre then follows Kathoon, learning that he is responsible for the robberies.

Spectre learns that Kathoon commands spirits to commit his robberies. He goes undercover, posing as a spirit to gain more information. Kathoon sees through the Spectre's disguise and is able to take control of the Ghostly Guardian.

Kathoon orders the Spectre to destroy a hospital. Spectre resists and with the Ring of Life finally breaks the sorcerer's spell. Spectre then chases Kathoon across dimensions, ending his reign of evil and freeing the spirits.

After successfully completing a daring diamond robbery, Gordon Slade hides out in the African jungle. Congo Bill is sent to find the thief and bring him to justice. During the search, Bill and Professor Kent are captured by the Bantus, a tribe of natives. They meet the masked chief whom they expose as Slade. The tribe allows Bill and Kent to leave for helping expose the phony. Slade tries to takes Bill's gun while being escorted out of the jungle. Before he can act, Slade is caught by a giant snake. He shoots it with the stolen gun, but he then falls into the river where he is killed by crocodiles.

Synopsis for Radio Squad: "Riddle of the Statuette"Edit

Synopsis for Sgt. O'Malley of the Red Coat Patrol: "Death in the Saloon"Edit

Synopsis for "The Origin of Doctor Fate"Edit

As a young child, Kent Nelson was exploring Mesopotamia with his father. Sven Nelson was an archaeologist who believed that the Pyramids were not created by Egyptians, but by beings from another planet. Kent wandered off alone and found a statue of Nabu the Wise, who telepathically signaled him to operate a nearby lever. This brought Nabu back to life, but also released poisonous gas that killed Kent's father. To repay him for his loss, Nabu promises to teach the young child the secrets of the universe. He said that through learning molecular control of his body he had grown to almost half a million years old, and was born on the planet Cilia as it passed Earth in orbit. Nabu raises Kent into a young man, and taught him skills such as levitation and telekinesis. Believing that he was finished with his training, Nabu told Kent that his mission was to do good and fight against evil, and to young Kent.
--- Returning to America, Kent met a woman named Inza Cramer in Alexandria who would become his traveling companion.

In the present day Kent Nelson and Inza Cramer are attending a dinner party in New York City, where they meet a man who believes he is being haunted. The man is a believer in reincarnation and had made a pact with several friends to help them return to life in case of their death, but finds that their spirits are now trying to claim his soul. Kent returns to his tower in Salem, and comes back as Doctor Fate. Driving the ghosts back easily, he realizes he must stop them at their source by visiting the underworld of Charn. Negal is the ruler of this realm, and he prepares to attack the doctor until Fate demonstrates his great powers and the demon is forced to surrender.

Retrieved from "https://heykidscomics.fandom.com/wiki/More_Fun_Comics_Vol_1_67?oldid=1362790"
Community content is available under CC-BY-SA unless otherwise noted.