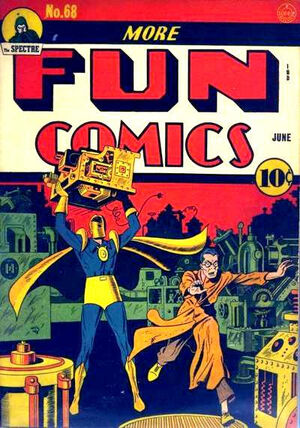 (adapted from plot summary at dcindexes.com)
An evil scientist has developed a machine which projects deadly sound waves. He sends his assistant, Nasha, to kill his former partner, Serga Roltavich, but Dr. Fate prevents the murder. Fate then assaults the madman’s lab, impervious to the deadly traps therein. Upon his defeat at the hands of Fate, the scientist throws himself to his death.

Appearing in The Spectre: "Menace of the Dark Planet"Edit

Synopsis for The Spectre: "Menace of the Dark Planet"Edit

When the entire populations of two nearby cities are found suddenly dead, the Spectre begins to search for the cause. His investigation leads him to a group of aliens, intent on killing humans to extend their own lives. The Spectre opposes them, but finds that they possess the power to immobilize him. With supreme effort, the Spectre overcomes the forces impeding him. Then he races back to Earth to stop the invasion and banish the aliens.

Retrieved from "https://heykidscomics.fandom.com/wiki/More_Fun_Comics_Vol_1_68?oldid=1362791"
Community content is available under CC-BY-SA unless otherwise noted.