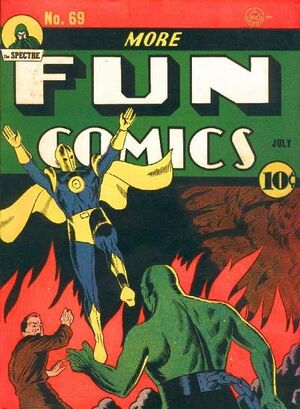 Later as Doctor Fate, Kent uses his mystic powers to track the shadow man to Ian Karkull, Dahlen's former partner. Karkull has invented a machine that can turn men into shadows and back. He is using the machine for crime, so Doctor Fate step in to stops the scientist. Karkull turns himself into an intangible shadow to escape, but when Doctor Fate destroys his machine, Karkull is unable to resume human form. Karkull is left to wander the world trapped in shadow form.

Appearing in The Spectre: "The Strangler"Edit

Synopsis for The Spectre: "The Strangler"Edit

Thomas Bardsley phones police to report a death threat. When police including Jim Corrigan arrive at Bardsley's house they find him strangled inside a locked room. Similar events take the lives of other men, forcing Corrigan's other self the Spectre to set a trap for the killer. When Jake Carstairs is threatened, the Spectre interrupts his death, discovering the killer is a plant. Spectre track down the plant's creator, who was extorting money from the victims. The Spectre ends the scheme, and the horticulturist is killed by his own plants.

Retrieved from "https://heykidscomics.fandom.com/wiki/More_Fun_Comics_Vol_1_69?oldid=1362792"
Community content is available under CC-BY-SA unless otherwise noted.