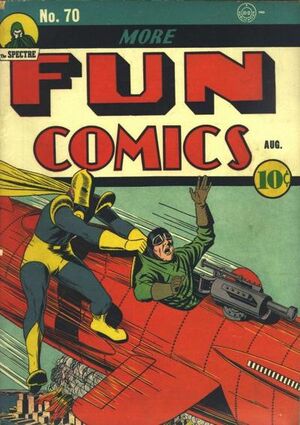 In the Arctic, Doctor Fate discovers that his old foes Wotan and Ian Karkull have helped each other escape from their prior predicaments, and joined forces. Fate battles them and wins. Wotan and Karkull are both apparently killed in a fire.

Appearing in "The Spectre: The Crimson Circle Mystic Society"Edit

Synopsis for "The Spectre: The Crimson Circle Mystic Society"Edit

Retrieved from "https://heykidscomics.fandom.com/wiki/More_Fun_Comics_Vol_1_70?oldid=1362793"
Community content is available under CC-BY-SA unless otherwise noted.