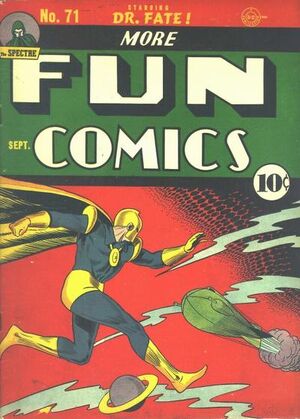 Appearing in The Spectre: "The Reluctant Bridegroom"Edit

Synopsis for The Spectre: "The Reluctant Bridegroom"Edit

(adapted from plot summary at dcindexes.com)
Jim Corrigan attends the wedding of Tom Grant and Barbara Newsome. Tom does not show up for the wedding, so Jim looks for him as the Spectre. However, a rare cosmic event dampens the Spectre's powers. Without his full power, the Ghostly Guardian cannot locate Tom, so he assumes Tom's appearance at the wedding. A gunman then kidnaps him and takes him to the location where the real Tom is still being held. The Spectre rescues the groom, but the delay causes the bride to call off the wedding.

The Spectre then plays matchmaker and gets the couple to reconcile. The wedding is rescheduled, but this time Barbara does not show up. The Spectre learns that she's received a letter threatening Tom if she married him. The Spectre offers his protection, and the wedding resumes. At the conclusion of the ceremony, the best man Allen Tracy tries to kill Tom. The Spectre saves the groom's life and exposes Tracy who want Barbara for himself.

Appearing in Johnny Quick: "The Riddle of the Crying Clown"Edit

Synopsis for Johnny Quick: "The Riddle of the Crying Clown"Edit

Johnny Chambers attends the circus to film it for the newsreels. A lion named Nero attacks the lion tamer forcing Johnny to speak the magic formula which gives him super speed. Johnny Quick then saves the lion tamer.

When the film footage has been developed, Johnny sees that a clown provoked the lion's attack. When he returns to the circus to question the clown, a man named Caesar puts the clown into a cage with an elephant to punish him for failure. Johnny then rescues the clown.

Johnny decides to infiltrate the circus as a strong man. He then learns that Caesar is the head of a crime ring. He is forcing the circus performers to use their abilities for robbery. Johnny tries to stop the robbery, but is captured. When he escapes, he exposes Caesar as the circus manager Sam Leroy and shuts down the crime circus.

One day, the Earth suddenly stops rotating causing the sun to remain on one side of the planet. This causes a drought on one side of the world, while the other gets no sunlight. Doctor Fate prepares to track down the source of the problem, but he is convinced by Inza to help stop the drought first. Using his powers he creates a rainstorm. After the storm, the Earth begins rotating again.

Scientist Adam Igorovich takes credit for the situation and extorts the various nations of the world. When they refuse to give in to his demands, he uses his machines to cause the Earth to draw closer to the sun.

Doctor Fate tracks Igorovich to the Arizona desert. He raids the laboratory, but the scientist takes Inza as his prisoner. Doctor Fate disappears until Inza is set free. Doctor Fate then returns, stops Igorovich, and destroys the lab.

Retrieved from "https://heykidscomics.fandom.com/wiki/More_Fun_Comics_Vol_1_71?oldid=1380112"
Community content is available under CC-BY-SA unless otherwise noted.