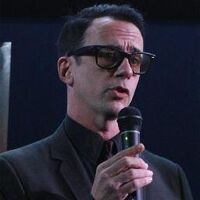 Mort Todd (born November 9, 1961,[1] in Maine), is an American who has spent his career in comics, animation and entertainment, notably as the editor-in-chief of Cracked magazine, and later, Marvel Music. He is the owner of Comicfix, a media company that has developed licensed properties for publishing, film, TV, and animation. As of 2013, he is the creative head of Station A, a video, web and publishing production company.

As a writer, artist or editor, Todd has worked at several comic book companies, contributing to a variety of characters, including Superman and Spider-Man to licensed properties such as Barbie and Looney Tunes. Newspaper comic strips Todd has written and drawn include Speed Racer, Rat Fink, and Molly the Model.[2] His illustrations appear on many CD covers, magazines, newspapers and ads.

With Daniel Clowes, Pete Friedrich and Rick Altergott, Mort Todd contributed stories and art to Psycho Comics. He sold his first screenplay for a TV pilot called The Ultimates to a German production company while still a teenager.[citation needed] The pilot was produced, but never distributed, and stars a young Clowes as a teen rock 'n' roll superhero.[citation needed] Mort also wrote and penciled some stories for Clowes' Lloyd Llewellyn series from Fantagraphics. Around then he started freelancing for DC Comics, Marvel Comics, Kitchen Sink, Myron Fass, and many other smaller publishers.

In 1985, Todd became editor-in-chief of Cracked magazine. There he signed artist Don Martin after a 32-year career at Mad Magazine.[4] Todd also published some of the earliest mainstream work of Altergott, Clowes, and Peter Bagge.

Todd created the comics magazine Monsters Attack!, which featured horror comics and articles about movies, and included one of the first interviews with director Sam Raimi.[5] Todd wrote and drew stories for Cracked and Monsters Attack!, and did the layouts for every cover.

In 1994, Todd launched a line of music comics called Marvel Music at Marvel Comics, working with such artists as Kiss, Rob Zombie, The Rolling Stones, KRS-One, and the estates of Elvis Presley and Bob Marley. Some of the talent working on these books included Neil Gaiman, Kyle Baker, Dan Barry, Severin, Colan, and Morrow.[6]

While at Marvel, Todd also edited a series of pre-Comics Code horror and giant monster reprints (Curse of the Weird and Monster Menace) from Marvel's past, and developed the oversized Comic Book by Ren & Stimpy-creator John Kricfalusi.

In 2005, Todd rejoined Cracked magazine, this time as a contributing editor, but left after several months.[7]

Todd has written and illustrated for the new Tales from the Crypt comic series, and completed new comic books featuring Lucy Hell, Devilgirl, The Secret Society and Mr. Krime. With his longtime collaborator Cliff Mott, Todd has created and directed three new animated cartoons for Playboy.[8]

Todd was assistant director on the live-action film Distraction,[citation needed] and directed his a live-action short, a gangster comedy called A Change of Heart.[citation needed] He is producer of The Diabolikal Super-Kriminal documentary, which had its world premiere in Italy at the Ravenna Nightmare Film Festival in November 2007,[9] and its U.S. premiere at the San Diego Comic-Con in July, 2009. The film was awarded a Special Mention at the convention and in November, 2011, won the "Golden Lobster" Director's Award at the Portland Maine Film Festival.[10] He has directed Music videos for cartoonist Peter Bagge's Seattle band Can You Imagine?,[11] the psychobilly band Psycho Charger,[12] the Spanish Help Me Devil[13][14] as well as an animated tease for his animated Sadistik: Strip & Kill web series.[15] He also provided some animation for the documentary Arias with a Twist, directed by Bobby Sheehan.[citation needed]

Todd’s media company, Comicfix, has developed licensed properties for publishing, film, TV, and animation. Besides translating the Sadistik photo novels, developing a live action Sadistik film series and animated web series, Todd is also adapting the Fredric Brown noir novel The Screaming Mimi into a graphic novel and screenplay. Other upcoming comic book projects include Bat Lady and collected editions of Molly the Model, Bob Marley: Tale of the Tuff Gong, All-Protoplasman Color Cavalcade and "The Uggly Family." Recent work includes a comic booklet in the Wilmer Valderrama DVD, The Dead One (aka El Muerto), a CD cover for Jon Spencer Blues Explosion and their European tour poster and videos for his band with Matt Verta-Ray, Heavy Trash.[16] Comicfix also published the three issue run of Holy Terror by Jason Caskey & Phil Hester that was started at Image Comics but was never completed there.

In late 2011, Mort started Station A, a media company in Portland, Maine, that creates print advertising and comics,[17] as well as a live action TV commercial he directed for Nosh Kitchen Bar that stirred a local controversy for its depiction of vegans.[18] as did an animated commercial for Taco Escobarr [17][19]

Retrieved from "https://heykidscomics.fandom.com/wiki/Mort_Todd?oldid=1548993"
Community content is available under CC-BY-SA unless otherwise noted.