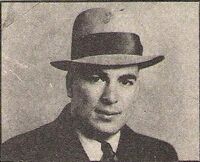 Mort Weisinger is best known as the editor of Superman during the 40's, 50's, and 60's and is credited with explaining Superman's powers in a more scientific way. He imagined that Superman's powers were gained by the lesser gravity of Earth and that Earth's yellow sun gave him many of his other powers while a red sun, like Krypton's would neutralize them. Weisinger also created many other characters and story devices in the Superman mythos, including Supergirl, the Fortress of Solitude, Brainiac, the Phantom Zone, and the Bottled City of Kandor.