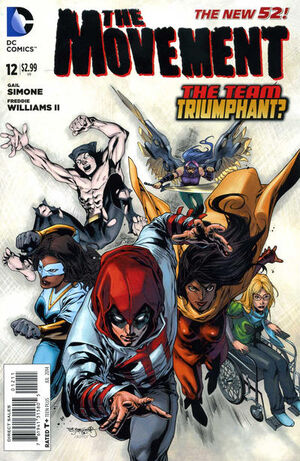 You get one chance to come quietly. Then the 'Tweens gets some of its blood back.

Appearing in "Railing Against the Thunder"Edit

Synopsis for "Railing Against the Thunder"Edit

While on her break from work, Holly encounters Captain Meers, who had been waiting for her in the alley. He admits that he hasn't come to arrest her, but he does want to know what the point behind the creation of The Movement was. She explains that she had a fantasy to be part of something better - where compassion wouldn't be a weakness. She had thought that as a team, they could remind people that it was okay to care, still. Then, she remembered that she lived in the The 'Tweens, and nobody was going to ask her team to join the Justice League. Sympathetically, Meers reminds that she's only a kid. The world isn't her responsibility.

Holly responds that her mother thought otherwise. She had only been six years old when she inherited the gift of the women in her family. Passed down from generation to generation on the women's side, she had gained the ability to read the emotional spectrum. Her own great-grandmother had been burnt to death, when she'd tried to use that gift for good. The people had thought it was voodoo. When Holly's mother saw how powerful her daughter was becoming with this gift, she made the choice to give up the child to her aunt's in Detroit. She told Holly's father that she was dead.

Elsewhere, a day earlier, James Cannon visited the grave of his wife, Ava before returning to his car and ensuring that he had managed to convince Joe Whitt of his plan.

Meanwhile, at the Sweatshop, Virtue and Tremor were attempting to drag Mouse to meet a girl. Ever since he'd decided he was in love with Tremor, he'd been driving her crazy with confessions of love, when she had already told him that she was Asexuality. So, she and Holly had found him Margaret, a girl who worked at a pet-shop and professed to love rats. From afar, Burden wondered if there was anyone for him out there, and smirking, Vengeance Moth responded that there was a perfect guy waiting for him, certainly. Suddenly, a notification warned her that a limousine had pulled up to the entrance to the tunnels.

Together, The Movement met James Cannon in the tunnels and warned him that he was not welcome there. Without much warning, Mouse attacked with his rats, prompting Cannon to exclaim that he had come for something other than to fight; negotiation. He explained that his son was the Cornea Killer, and he needed to be captured before he killed again.

Meers points out that Cannon isn't particularly trustworthy, but Holly responds that he is a father. She knows well enough, thanks to her gift, that eventually, she can find something sympathetic even in the worst of people. Her own father had grounded her for seeing a girl she liked when she was ten. He hadn't understood then, but she knew he would have, in time. At that age, though, she didn't know how to control her powers at all, and her rage had put him in the hospital. It was then that her mother decided it would be best to send her away.

In any case, Holly had read all kinds of emotions in Mr. Cannon - including hope, and so she agreed to help. James waited at his wife's grave, and his son Terry soon arrived. He commented that his mother's death had mostly been an accident. Worriedly, James asked whether he would become an accident someday too. Terry hugged him, promising that they would always be friends. Just then, The Movement appeared, warning that they had come to take him to the police for the murders he'd committed. Naturally, Terry resisted, and so they attacked - but they had made the mistake of forgetting just how much Terry loved to kill.

Mouse was injured, prompting Burden's rage to overcome him, and he grabbed Terry up in his great demonic fists. Seeing his son in danger, James called to Officer Whitt, commanding him to kill the Movement before they killed his son. Gladly, Whitt began firing shots, hitting Burden in the chest, and grazing Katharsis' temple. Increasingly insane, Terry called down a thunderstorm and declared himself a god. Angrily, Holly grabbed James Cannon up by his coat and announced to Terry that his father had planned this. He had called the Movement to take him down. As Whitt trained his rifle's sight on Virtue's head, he mused that he would take down Cannon at the same time. From across the graveyard, Terry spotted Whitt, and leapt in front of the bullet at the last second, taking it through the skull, causing the rain to stop instantly.

Angrily, Vengeance Moth trapped Whitt with her power as Cannon ran to his dead son's side. Holly could read his grief, but she could also see that he had intended his son to die a hero - giving Terry the credit for killing the terrorists called "The Movement." Struggling, she couldn't resist the desire to end him. Suddenly, Tremor grabbed her from behind, holding her, and keeping her from making a mistake. Holly couldn't contain her tears.

Meers comments that nothing about her story suggests that he should arrest her. He senses her apprehension and confesses that when he'd shot her father, the man had been robbing a bank. He had refused to put down his pistol. Meers had no way of knowing that the gun wasn't loaded. He had to shoot. Holly responds that she knows that. She knows he's a good man, but she had a lot of anger in her for him, when she knew he'd killed her father. Standing, Meers explains that he rarely sees his own daughter, and wonders if she might like it if he looked in on Holly from time to time. Tearfully, she hugs him, and agrees that she would.

Retrieved from "https://heykidscomics.fandom.com/wiki/Movement_Vol_1_12?oldid=1455411"
Community content is available under CC-BY-SA unless otherwise noted.