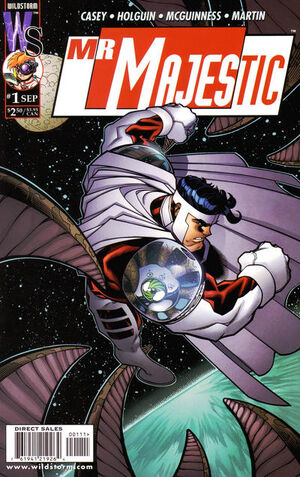 The issue opens with Mr. Majestic discovering some kind of alien probe. After making short work of it, he flies to the Rushmore Sanctuary, Maj's home, which is hidden inside Mount Rushmore. Majestic determines the origins of the probe; it's a scout for a powerful force in the universe which destroys solar systems. He quickly rushes to the Pentagon to prepare for the inevitable.

With the help of Desmond, a cyborg kid in a giant wheelchair (who apparently works for the Pentagon), Majestic gathers together a group of the most intelligent scientists available. He explains to them that in order to stop the being that sent the probe, they must change their solar system to the point that it is unrecognizable from the original solar system map provided by the probe. Basically, it involves making Earth's system look like a completely different one by shifting planets and moons around.

The scientists are supposed to determine the best means to move the planets without damaging orbits, lunar rotations, and gravitational pulls. A combination of Kherubim-designed stabilizing satellites and Maj's Kinetic Field Gauntlets aid the process as the hero swaps moons, adds rings to Mars, and turns a passing comet into a tenth planet. During this work, years pass on Earth, children are born, Desmond ages, and the Vietnam War ends. The last act is to turn Earth's sun into a binary star after altering his skin to a hard diamond-like substance.

Finally, after years of preparation, the being which sent the probe (called system-eater and cosmic negator by some cultures) comes to Earth's system, sees that it is not the one it was looking for, and leaves. With the crisis averted, Majestic now works towards putting everything back to the way it was.

Retrieved from "https://heykidscomics.fandom.com/wiki/Mr._Majestic_Vol_1_1?oldid=1443903"
Community content is available under CC-BY-SA unless otherwise noted.