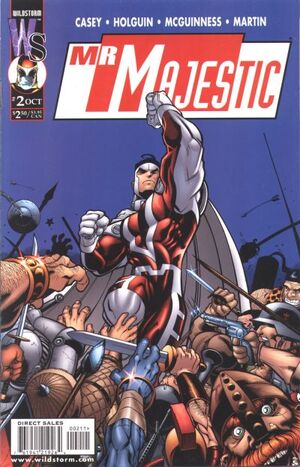 In the prologue, a scientist named Dr. Martin Kingsley thinks over his failures to help his only child and chooses to shoot himself in the head hoping to find some measure of atonement. Eight months later, Mr. Majestic flies to Great Britain to stop a group of 8th century Vikings who recently appeared and, thinking that they were only raiding a simple coastal village, started terrorizing civilians. Majestic doesn't break a sweat subduing the Vikings and turns them over to a constable. Maj then flies to Langley, Virginia, to talk to Desmond about what could have caused it. There are other similar events happening, such as the Black Plague in France and Mongols raiding China, but they don't seem to have any rational connection.

Desmond believes that the temporal phenomena are the beginning of a growing anti-probability wave which could, in theory, end all reality. As Majestic deals with the events as they happen, Desmond tracks down the research of Martin Kingsley, an expert in temporal anomalies. Desmond also finds out that Kingsley committed suicide because he found out what would eventually cause the temporal phenomena currently spinning reality out of control.

The nexus of the time problem is his daughter Kata Kingsley, a living anomaly, which actually affected her father's choice in careers, which led to him discovering her nature and killing himself. She puts Majestic in some kind of time loop after he tries to talk to her, until Desmond has Maj use a temporal stasis generator originally designed by Kingsley, which he couldn't bring himself to build and use, to freeze everything except for Maj and Kata. Majestic helps the little girl deal with the inevitable erasure from existence by reminding her about her father. The little girl blinks out and the universe is saved, though Majestic feels horrible for what he had to do.

Afterwards, it is shown that Kata is now in some kind of pocket dimension where she can relive a happy day with her father over and over until the end of time.

Retrieved from "https://heykidscomics.fandom.com/wiki/Mr._Majestic_Vol_1_2?oldid=1443904"
Community content is available under CC-BY-SA unless otherwise noted.