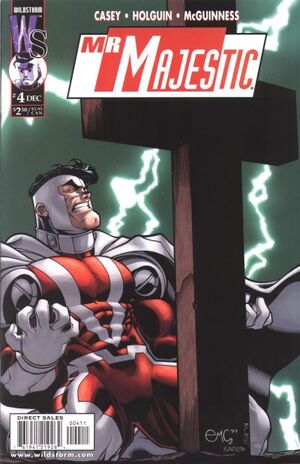 Majestros has a son named Majestrate whom he takes along from Khera. Majestrate's body does not survive the crash landing, but his mind is preserved in a crystal. Majestic obtains a substance called "starstuff" from another dimension in order to transfer his son’s mind into a new artificial body. The reunion is one of the rare occasions Majestic showed any emotion. The joy that both father and son experience is short-lived, as the "starstuff" originates from another dimension and is causing an interdimensional imbalance, manifesting itself in a man named Freddie Noondyke. For the imbalance to be corrected, the "starstuff" in Majestrate’s body would have to be returned to the dimension it came from, resulting in ending the boy’s life. Majestrate convinces his reluctant father that it is the right thing to do. Majestrate flies into the dimensional maelstrom and rights the imbalance. When Majestic flies down, he finds the metal skeleton of Magestrate's artificial body, and the loss of his son leads to a long period of depression for Majestros.

Retrieved from "https://heykidscomics.fandom.com/wiki/Mr._Majestic_Vol_1_4?oldid=1443906"
Community content is available under CC-BY-SA unless otherwise noted.